Steelers History: The Steelers Play Their Hearts Out in Cleveland 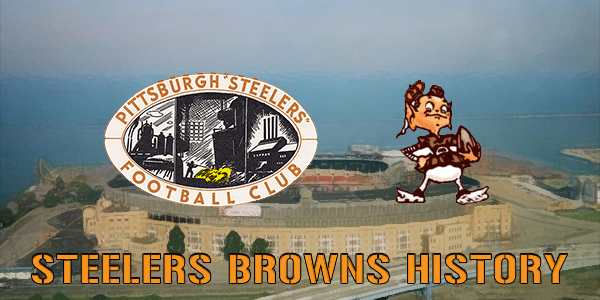 The bitter rivalry that existed between these two teams began in 1950 when the All-American Football Conference folded and three of the AAFC teams entered the NFL. The 49ers and Colts were joined by a Browns’ team that had won all four of the AAFC championships under head coach Paul Brown.

Against the Steelers, the Browns own a 39-28-1 record in Cleveland, built primarily in the early years when they dominated the Same Old Steelers who struggled to put up any resistance.

With Otto Graham at quarterback, the Browns monopolized the NFL Eastern Division in the early part of the fifties. While Cleveland never suffered a losing season in their first six years, the Steelers did not once enjoy a winning one during that time.

The Steelers were winless in Cleveland while registering just one win in six games against their rivals in Pittsburgh.

Before the 1956 season began, Walt Kiesling, who was serving his second stretch as the Steelers coach, was confident of an improved performance from his team.

The Steelers surprised the Washington Redskins in the season opener 30-13 on the back of Lynn Chandnois who scored three touchdowns. Ted Marchibroda, who was making his debut at quarterback, scored Pittsburgh’s other touchdown.

After that success, the Steelers reverted to their usual standard of play and lost the next three games including a 38-10 thumping in New York.

Although the Browns won the championship game the previous season, they were also off to a bad start. Their only win was in Pittsburgh where they edged the steelers 14-10.

For the rematch in Cleveland, the Steelers were 6-point underdogs while the Browns were also fielding a new quarterback in Vito “Babe” Parilli, who had been playing for the Ottawa Rough Riders. 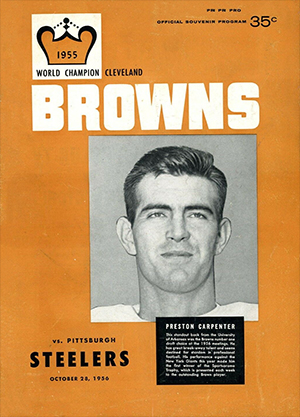 In an attempt to break their three-game losing streak, Coach Kiesling decided to watch the game from the stands and telephone his instructions down to his assistants on the sideline.

The strategy appeared to have failed initially. Encouraged by the 50,000 home fans, Cleveland went into an early lead. Parilli launched a 68-yard pass to Dante Lavelli for the first score though the conversion failed. On the Steelers ensuing series, a Marchibroda ‘s interception was returned 35 yards by Don Paul for the Browns’ next touchdown.

In the second quarter as the Browns attempted to increase their advantage with a field goal attempt, Dale Dodrill broke through the Browns offensive line to block the kick while Dick Alban picked up the loose ball and returned it to the Browns 33.

Marchibroda used the turnover to make amends for his previous interception throwing a 10-yard touchdown pass to Lynn Chandnois. Another defensive play saw George Tarasovic intercept a Parilli pass and return it 25 yards. The short field was made shorter after two players engaged in an altercation. Browns’ coach Paul Brown was penalised 15 yards for going on the field to protest, adding more yardage for the Steelers.

Three plays later, the Steelers tied the game when Chandnois dived over for a 1-yard touchdown. A successful Gary Glick point after attempt saw the Steelers move 14-13 ahead.

Cleveland fought back and Parilli moved the ball to the Steelers 24. Under pressure as the Steelers defense swarmed across the scrimmage line, Parilli let fly with a desperation pass which Jack Butler plucked out of the air before returning it 17 yards to put the Steelers back on offense.

With time running down as the first half expired, Marchibroda launched a pass to Lowell Perry who shook off a tackler to complete a touchdown catch of 75 yards. The score ensured the Steelers of a 21-13 lead at  half time.

At the beginning of the second half the Steelers recovered a Browns fumble, but Marchibroda returned the gift with an interception as the teams fought out a scoreless quarter.

The Browns continued to play catch up. At the beginning of the final period Cleveland kicked a 28-yard field goal before Click replied for the Steelers with an 11-yard field goal that sealed a 24-16 victory.

The Pittsburgh Steelers 24 at the Cleveland Browns 16

Following an accusation prior to the game from their coach of being lackadaisical, the Steelers had played their hearts out to earn their first win in Cleveland. After the game, Coach Kiesling acknowledged, “Everything’s hunky-dory now.”

Every mistake we made went against us,” Browns coach Paul Brown suggested. Cleveland, who had gone to the championship game ten years in a row, saw any chance of continuing that streak broken. They finished the season with the same record as the Steelers at 5-7.

“Steelers Show Browns Finished,” was the headline in the Pittsburgh Press before characterizing, “the Browns as coming back to earth with a thud before an incredulous crowd of 50,358. Without Otto Graham, their retired quarterback, they’re just another football team.

But more significant than their errors was the fact that the Browns were spotted 13 easy points in the first three minutes, yet couldn’t make them stick.”