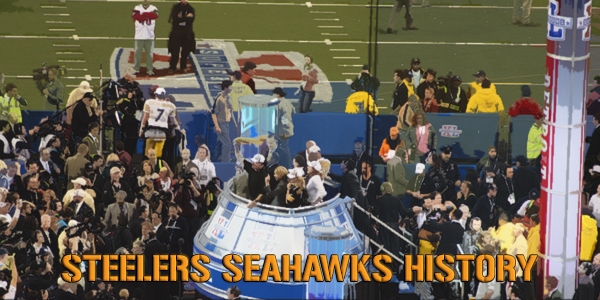 The Seattle Seahawks joined the league as an NFC expansion team in 1976 when the Pittsburgh Steelers were enjoying their most successful era as the best in the NFL.

Overall, the Seahawks edge the Steelers 10-9 in wins although in Pittsburgh, it is the home team that dominates 7-3.

The one postseason game the teams have contested was Super Bowl XL when Ben Roethlisberger was making his debut in the championship game.

Roethlisberger was drafted in 2004 and after three games of his rookie season took over the starting job when Tommy Maddox was injured. Roethlisberger led the team to post season football his first year after finishing top of the AFC North. Pittsburgh won the Divisional playoff game before losing to the New England in the AFC Championship contest.

The following season the team finished second in the division to the Bengals and went into the playoffs as an AFC wildcard. They faced a task that no other NFL team had succeeded in overcoming. No team had won a Super Bowl playing all their games on the road.

The Steelers began their quest when they took no prisoners knocking out their division rivals Cincinnati 31-17 in the wildcard. They next edged passed the Colts 21-18, but to get to the Super Bowl, they had to overcome the Broncos in Denver.  Roethlisberger again stamped his authority on the contest with his 4-yard touchdown run that completed a 34-17 victory after the Steelers dominated the game.

The fairy tale had now come true for Jerome Bettis. After the Steelers lost to the Patriots the previous year, Bettis had seriously considered retiring after subjecting his body to twelve years of bruising hits. With the encouragement of his teammates and the thought of playing in the Championship game in his hometown of Detroit, Bettis decided on playing one more year.

The Seahawks were making their first appearance in a Super Bowl while the Steelers were appearing for the fifth time after placing four Lombardis in the trophy room. 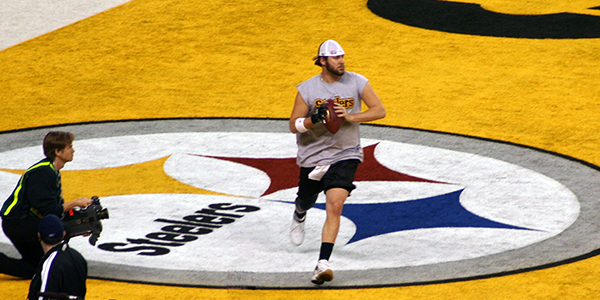 The Steelers vs the Seahawks Super Bowl XL, February 5 2006 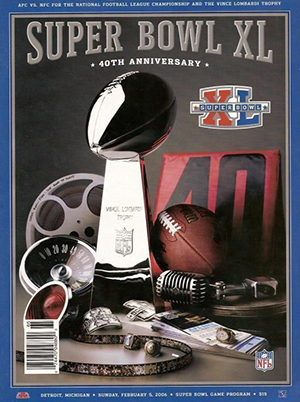 During the Steelers’ playoff run to Detroit, Roethlisberger played some super football. On the big stage in Detroit, he was hesitant and began cold, throwing just one completion from his first six pass attempts.

Lacking any cohesion, the Steelers spent the first quarter failing to make a first down while their opponents were able to move the ball. The Steelers defense held the Seahawks to a 47-yard field goal and as the game went into the second quarter, they were needed to step up to defend a turnover.

While Ben continued to struggle, his intended pass to Antwaan Randle El was intercepted presenting Seattle with an opportunity to increase their slender advantage. The Steelers defense held them to a three and out and after the punt, Pittsburgh began their possession on the 41-yard line.

Roethlisberger now began to find his receivers including a pass of 37 yards to Hines Ward and the Steelers moved the chains 56 yards to Seattle’s 3-yard line. After Bettis gained two yards, Roethlisberger, helped by a block from Bettis, powered the ball over  for the touchdown and the Steelers were finally on the scoreboard.

Seattle had two minutes before the end of the half to play catch up, but clock mismanagement saw their only chance to score go astray when Josh Brown missed a 54-yard field goal attempt.

After Roethlisberger opened the second half with another incomplete pass, Steeler Nation were not prepared for the burst of speed from Willie Parker on second down. Aided by a block from Alan Faneca, Parker burst through the Seahawks defense and left them standing as he ran 75 yards into the end zone. The longest Super Bowl touchdown run extended the Steelers lead.

The Seahawks next missed a 50-yard field goal attempt which gave the Steelers the ball on the 40. Mixing passes to Ward with runs from Bettis, the Steelers moved the ball to their opponents’ 6-yard line. With Pittsburgh pressing, Roethlisberger’s pass intended for Cedrick Wilson was intercepted by Kelly Herndon and returned 76 yards.

As both teams struggled to put any offense together, the teams exchanged possessions before Hasselbeck led his team 71 yards on a drive that took the game into the final period and the Seahawks into the red zone. With the Seahawks looking to score, Ike Taylor came up with a crucial interception he returned 24 yards.

After a penalty, the Steelers began their possession on their 44. Taking advantage of the great field position, Coach Cowher called a gadget play that finally swung the game the Steelers’ way. Roethlisberger handed off to Parker who gave it to Randle El on a reverse. The Steelers had been so conservative during the game, the Seahawks figured it was another run. Ward ran around the safeties and was wide open to catch Randle El’s touchdown pass.

It was the first time a touchdown pass had been thrown in a Super Bowl by a wide receiver. The reception saw Randle El’s pass efficiency on the season increase to 3 from 3 including a 51-yard touchdown pass to Ward against Cleveland earlier in the season.

The Steelers defense ensured the Seahawks were then held while Bettis was used effectively to run out the clock to safeguard the Steelers’ victory.

The Pittsburgh Steelers 21 vs the Seattle Seahawks 10

With five catches for 123 yards, Hines Wards was named the game’s MVP as the Steelers took a fifth Lombardi back to Pittsburgh.

Naturally, Jerome Bettis was ecstatic with the team’s victory. “I’m a champion. For the Bus, I think the last stop is going to be here in Detroit. It’s been an incredible ride. I decided to come back to win a championship. Mission accomplished.” And with those words, it was official; Bettis had retired after thirteen years at the top level.

On becoming the first coach to win the Super Bowl on the road, Coach Cowher was philosophical. “A lot of people tell you ‘you can’t do it’, but you know what, it doesn’t mean you don’t go and try,” he said. “History was not going to determine our fate. Our effort today decided this game and that’s what great. It’s surreal. I’m going to tell you, this is a special group of coaches, a special group of players. I was one small part of this.”

Dan Rooney estimated that more Steelers fans were at Super Bowl XL than in any of their previous five. “I think it’s tremendous,” Rooney said. “And what they went through to get here – getting the tickets, getting the hotel rooms, driving here.”

The large number of fans included one from England after I flew in to watch my second Steelers championship game. This time I was blessed with my first Super Bowl win.