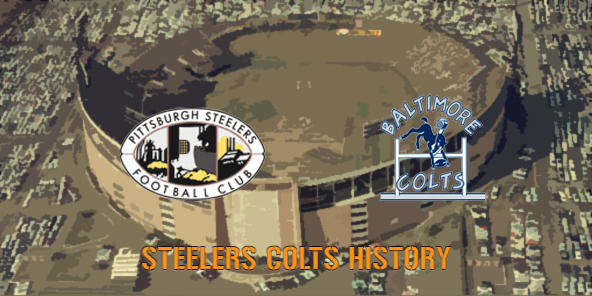 The Pittsburgh Steelers have enjoyed considerable success when playing the Indianapolis/Baltimore Colts. Leading the series 26-6 overall, they are also a healthy 9-4 on the road. Five of their wins have been in the post season.

The Baltimore Colts joined the NFL in 1950 from the All-America Football Conference, along with the Browns and the 49ers, when that rival league folded.

The Colts’ first year in the NFL saw them play and lose to the Steelers twice. First in an exhibition game 30-27 and then in the regular season 17-7 when the Steelers finished 6-6.

The following year, the Colts dropped out of the league before re-joining a year later when they met the NFL’s financial requirements.

When the two teams next met in 1957, Art Rooney had just installed another head coach in Pittsburgh, but this time it wouldn’t be the usual old pals act that he had previously favored.

Buddy Parker was one of the most successful coaches in pro football taking the Detroit Lions to three World Championship games at the beginning of the fifties, winning two of them.

At the 1957 annual “Meet the Lions banquet,” which is usually a time of celebration, Parker surprised everyone by announcing he was resigning. “When you get to a situation where you can’t handle your football players it’s time to get out and that’s what I’m doing tonight,” he declared.

Noting that his Lions squad was the worst team he had ever seen in training camp, Parker added, “I’m not through with football – I’m just through in Detroit.”

Within a few days, rumors that Parker had signed with the Colts were being denied while quiet negotiations were going on with the Art Rooney.

Walter Kiesling had been coaching the Steelers for his second stint with the team, but this time around he found little success. He was instrumental in encouraging Mr. Rooney to hire Parker. “If you have a chance to get Parker don’t pass it up,” he told Mr. Rooney. “I’m willing to step down.”

A week later at the end of August, Parker was named as the Steelers new head coach. When the news broke, the Pittsburgh ticket office suddenly became very active with fans seeking tickets for the forthcoming season in anticipation of success.

In his first players’ meeting, Parker was forthright declaring, “We are here to win and anyone who doesn’t feel that way can leave now. That’s all boys.” He retained all the existing coaches including Kiesling to maintain continuity.

He had a month to prepare for the new season and began by removing the team’s deadwood while acquiring new players to fit his needs. Before the arrival of Parker, the Steelers had lost their first two exhibition games but after he took over, they beat the Eagles 17-12.

Before the game, Art Rooney told reporters, “All the coaches in the National League know their football. There isn’t much to choose among them. What you need to win is a fellow who knows how to handle his players. We think we signed one in Parker.” His team’s defeat of the Lions must have put a smile of satisfaction on Mr. Rooney’s face.

In the weeks leading up to the season opener, Parker was busy putting his team together. The most important change was when he traded the team’s next two number one draft picks for quarterback Earl Morrall from San Francisco. Parker called Morrall the best in the league.

When Morrall led the Steelers to an opening day 28-7 win over Washington, Mr. Rooney and Coach Parker would have felt vindicated over the high price they paid to bring the player to Pittsburgh.

The following week’s loss to the Browns smothered the euphoria but going into the week six game against the Colts, the Steelers were 3-2 and sitting one game behind Cleveland in the Eastern Conference.

The Baltimore Colts with ex-Steeler Johnny Unitas at the helm had the same record as the Steelers and were in second place in the Western Conference. 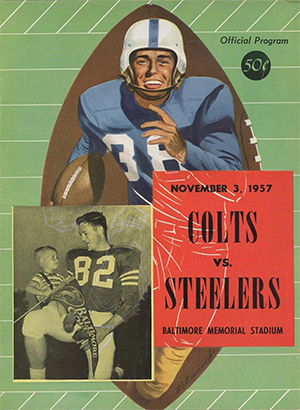 Before 42,000 howling partisan fans, Unitas led the Colts to an opening touchdown drive of 81 yards and it looked the Steelers were going to have a long day on the field. The Colts conversion was blocked by Jack Butler to give them a 6-0 lead.

Butler would be a persistent thorn in the Colts play all game, intercepting three passes. The Steelers wasted a chance to reduce the deficit when Gary Glick missed a 24-yard field goal attempt that went wide. With their ground game stifled by a solid Colts defensive line, Morrall took to the air.

Midway through the second quarter, the Steelers fielded a punt on their opponents’ 49. Three plays later, Morrall launched a bomb to Ray Matthews who plucked it from the air on the ten before racing into the end zone for the score.

With the Steelers defense now controlling the game, the same pair on offense produced another score in the third quarter after Unitas was intercepted. Matthew snatched Morrall’s pass from under the nose of a Colts’ defensive back before taking the ball 22 yards for the touchdown.

The Colts hit back on their next series, going 61 yards and finishing with an 8-yard touchdown run from George Shaw to reduce the Steelers lead to 14-13.

In the final period Glick kicked a 16-yard field goal for the Steelers as they took a 17-13 lead. The final act of humiliation for Unitas came on Baltimore’s next drive when he was tackled in the Colts end zone for a safety.

The Pittsburgh Steelers 19 at the Baltimore Colts 13

The Steelers finished the 1957 season 6-6 which was their best for four years while Parker went on to coach the team for eight years with a 51-47-6 record.

After the Steelers began the following season 0-2, Parker traded Morrall to the Lions for Bobby Layne

In 1962, Parker’s team finished in second place with a 9-5 record and in 1963 he guided the team to within a whisker of a division championship. The Steelers went into the final game of the season tied with the Giants. The had shut the Giants out 31-0 in Pittsburgh but lost the showdown in Yankee Stadium 33-17.

It would be a few more years before the Steelers got that close again.