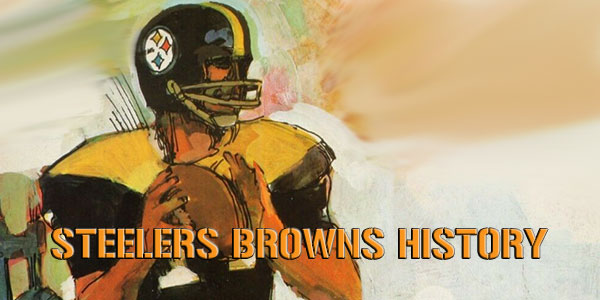 The Pittsburgh Steelers own a 76-59-1 record over the Cleveland Browns and when the games are played in Pittsburgh, they are even more dominant at 48-21. In Heinz Field the Steelers led their rivals 17-1 having won 15 straight.

The rivalry began in 1950 when the All-American Football Conference folded and three of the AAFC teams entered the NFL. The 49ers and Colts were joined by a Browns team that had won all four of the AAFC championships under head coach Paul Brown.

The Browns dominated the early years before the Steelers began to come into their own during the seventies. This week’s history highlight involves the Steelers rookie kicker Matt Bahr on November 25, 1979 game when the (8-4) Browns traveled to the (9-3) Steelers.

The Steelers were looking to go to their fourth Super Bowl in six years while the Browns were hoping to make the playoffs for the first time in seven years.

Earlier in the season the Steelers had swamped the Browns in Cleveland 51-35 as the Pittsburgh’s ground game gained 361 yards with Franco Harris contributing 152 from 19 carries.

The week before the game, the Steelers suffered a shock 35-7 loss in San Diego which saw Houston join Pittsburgh on top of the AFC Central at 9-3.

The Browns were one game behind which meant both teams needed the win to keep their playoff hopes alive. The Browns had never won in nine appearance in Three Rivers Stadium but believed this would be their year.

“In the past the Steelers have been the superior team, but I feel we have closed that gap,” suggested Cleveland’s quarterback Brian Sipe. “I think we’ve reached the point where we have as much of a chance to win as they do. And I suspect, they are aware of that.”

The Browns’ receiver Reggie Rucker also believed they could win.  “We’ve got the most superior offensive team in the league,” he offered. “Nobody can stop us – and they know that. You can believe they’re just not sitting back as pretty as before when they’ve played us. Now they’ve really got to take us seriously.” 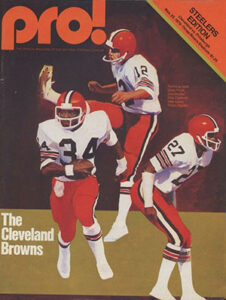 When the Browns led 10-0 before the Steelers had even played a down, the watching fans back in Cleveland would have been thinking their year had arrived.

Ozzie Newsome caught a 21-yard pass that put the Browns ahead and, after the Steelers fumbled the ensuing kickoff return, the Browns stretched their lead with a field goal.  Don Cockcroft’s field goal set up a duel with Steelers rookie kicker Matt Bahr. The pair exchanged two field goals each before Sipe interrupted their exchanges with a 16-yard touchdown pass to Dave Logan that gave the Browns a 20-6 lead.

Terry Bradshaw joined in the contest and led the Steelers on a 8-play, 76-yard drive that Franco Harris completed with a short 2-yard touchdown catch to  reduce Pittsburgh’s deficit to a touchdown as the teams went to the locker rooms.

The Browns increased their advantage in the third quarter when Sipe found Calvin Hill for a touchdown. With no ground game to support Sipe, Cleveland managed to enter the final period of regular time ahead 27-13.

The Steelers fightback began as Bradshaw found Randy Grossman with a 47-yard pass on a third and two. The 89-yard drive finished with a 1-yard touchdown run from Harris although the Browns were not about to roll over without a struggle. Cockcroft hit another field goal which meant the Browns were ten points ahead and within ten minutes of breaking their Three Rivers jinx.

Given good field position after Theo Bell returned the kick to the Steelers 37, Bradshaw took the air. Four completions moved the chains to give Harris the opportunity to run right off guard for a 3-yard touchdown that meant the Steelers were within three points.

After Pittsburgh forced Cleveland to punt on their next series, poor Browns tackling allowed Bell to return the kick 27 yards to the fifty. The Steelers moved the chains to gain a first and goal at the 8-yard, but the Browns defense held and with nine seconds remaining, Bahr kicked a 21-yard field goal to send the game into overtime.

The NFL didn’t introduce overtime until 1974. The Browns had already played two overtime games in 1979 and when they won the coin toss, it appeared they were heading for a third overtime win of the season.

Overtime revealed two teams that were struggling to find the win as they traded interceptions, but a logistical mistake by the Browns finally brought their downfall. After the Steelers were penalized for illegal motion after a one-yard gain, that would have brought a third down and nine, Cleveland accepted the penalty to replay the down.

Bradshaw took advantage of this “extra” down scrambling for 28 yards to move the chains before the drive finally stalled as the Browns defense held firm, but the Steelers were now within field goal reach.

With just nine seconds left, enter the gladiator into the cauldron of Three Rivers Stadium with 49,000 fans falling silent in apprehension. Matt Bahr had already put two wins on the board for the Steelers. In week one, his 41-yard field goal in overtime gave the Steelers a 16-13 victory and in week three, his 20-yard field goal deep in the fourth quarter saw the Steelers triumph 24-21.

Bahr later admitted, “You try not to think about what it means.” If successful, it would see the Steelers get back on track towards the playoffs. “You just try to do your best,” Bahr added. His best was a kick from 37 yards that gave the Steelers the victory.

The Steelers finished the season 12-4 and went on to win Super Bowl XIV. The Browns failed to make the playoffs again.