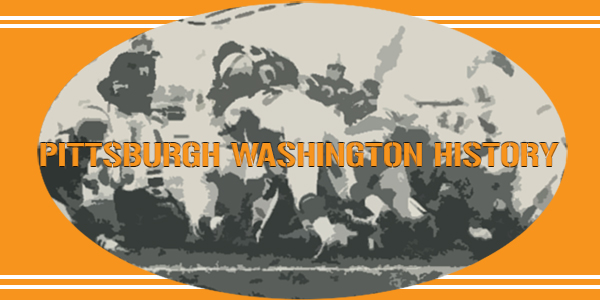 The first decade of pro football in Pittsburgh saw the Washington Redskins owning the Steelers whenever they played, with Washington winning 16 games and losing only 4.

Since those early days, Washington has overall won 43 while the Steelers are closing the gap with 34 wins. When the teams play in Pittsburgh, it is a lot closer with Washington only just ahead 22-20-1. That one tie was a 14-14 contest in 1943 and interestingly, three years later they tied by the same score in Washington. The teams also threepeated the 14-14 score line in 1958.

The teams met twice a season until the NFL merged with the AFL in 1970 and the Steelers moved across into the AFC. The following decade saw the teams playing only twice with both games in Pittsburgh.

In 1973, the Steelers were beginning to reap the reward of Chuck Noll’s strategy of building the team through the draft. His number one pick from three years previous, Terry Bradshaw, began the ’73 season as the Steelers starting quarterback.

In week 4 against the Chargers, the Steelers had built a 38-0 lead by half time so Coach Noll replaced Bradshaw with backup Terry Hanratty. Bradshaw again started the following week for a 19-7 loss in Cincinnati and also in their next game against the 21-point underdogs Jets. Behind 14-12 to New York, the Steelers were struggling so Coach Noll didn’t hesitate to bench Bradshaw and replaced him Hanratty, who led the team to a 26-14 victory initiated by his 16-yard touchdown pass to Ron Shanklin.

During the week 7 contest against Cincinnati, Bradshaw was forced to the sideline in the second quarter with a partial separation of his right shoulder. Hanratty replaced him and overcame bruised ribs to lead his team to a 20-13 win.

Bradshaw’s injury meant Joe Gilliam was activated from the practice squad. Gilliam was a rare black quarterback playing in the NFL and had been selected by the Steelers in the eleventh round of the 1972 draft.

With the Steelers suffering quarterback woes, the Chargers contacted the team offering 40-year old Johnny Unitas if Pittsburgh took over his salary estimated at $250,000 per season. The Steelers declined the offer, but probably reflected on the irony of letting Unitas go after drafting him two decades previously. 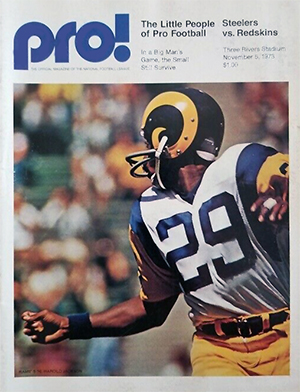 The (6-1) Steelers were looking to win their thirteenth consecutive home game while the reigning NFC Champion (5-2) Redskins, were intent on returning to the Super Bowl.

Hanratty was making his thirteenth NFL start on a chilly night in front of the national television audience of Monday Night Football. Playing the game under constant pain, Hanratty threw an early interception that gave the Redskins a three-point lead from a field goal.

Despite his distress, Hanratty gave the Steelers a 14-6 lead at halftime after throwing touchdown passes to Preston Pearson (7 yards) and Ron Shanklin (24 yards). The Steelers defense was doing its best to prevent their opponents from scoring, holding them to two field goals in the first half and one in the third quarter as Washington closed the deficit to five points.

Hanratty’s discomfort was increasing as the Washington defense applied pressure and he was having difficulty passing the ball. “I couldn’t throw off-balance,” he admitted after the game. “I have to get all my weight behind the ball, and I couldn’t do it.”

Late in the third quarter, Joe Gilliam came on to replaced Hanratty while the Steelers were holding precariously onto their slender lead.

Writing in the Pittsburgh Press, Phil Musick was heartfelt when describing Gilliam’s performance:

He was beautiful. He stood there rooted like a tree, and he threw it and threw it and threw it some more – as if he weren’t being intercepted every second or third time; as if the Washington Redskins weren’t threatening to turn one of his passes into a triumph for perseverance; as if he weren’t as scared as Chuck Noll was while watching him act like Joe Namath instead of a 22-year old kid playing for exactly the second time when it meant something.

With eight minutes left and the Steelers holding infirmly to a 14-9 lead, Joe Gilliam – who had thrown an interception and two incompletions in his three most recent efforts and would not put one on the money the rest of the hairy way – laid the Redskins to rest.

Ignoring a heavy rush, he zinged one into a seam in the Washington zone. Running wide open, Barry Pearson took it just behind a linebacker and just in front of the safety and disappeared into the night. “I had a chance for my first touchdown. Nothing was going to stop me,” Pearson explained.

Nothing did and Pearson’s 46-yard touchdown catch put the Steelers 21-9 ahead. Washington scored a consolation touchdown, but nothing was going to prevent a Steelers win as their defense stopped the Redskins seven yards from the goal line on the final drive of the game.

Gilliam’s performance didn’t win him the starting job as Hanratty was back in the role the following week and Bradshaw returned for the week 12 game in Miami to see the season out.

The Steelers finished 10-4, the same as the Bengals who took the division title. Going into the playoffs as a wildcard, the Steelers fell to the Raiders in Oakland.

Any debate over who was the Steelers starter was finally silenced. 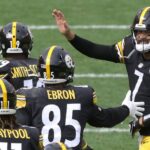