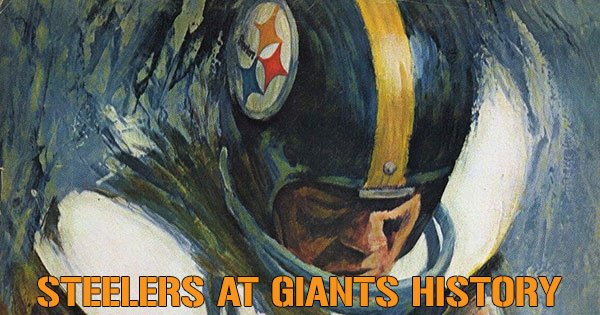 With the new NFL season upon us, I thought I would take a look at each Steelers game from a historic point of view and pick one of the great games played against their opponents.

The Steelers vs the Giants 1966

Unlike many teams the Steelers play, Pittsburgh does not hold a good record against the New York Giants. The Giants are ahead 24-16 when the Steelers visit Gotham City, although most of the losses occurred back in the day when it was the Same Old Steelers.

The two teams met twice a year before the AFL merged with the NFL in 1970. With the merger of the leagues, the Steelers moved into the AFC as one of three teams needed to balance the two conferences with thirteen teams in each.

The 1965 Steelers went 2-12 under Coach Mike Nixon. He had the misfortune to have been elevated into the head coach position from their backfield coach when Buddy Parker quit “in the interest of the team,” after losing four exhibition games.

Nixon brought two years of experience as the head coach of the Redskins to the organization, but that was with a humble 4-18 record. He didn’t improve the Steelers and he was fired at the end of the season. “Now we will take our time and try to sign the best man available,” said Dan Rooney who was a Steelers director at the time.

The organization settled on the Rams offensive line coach Bill Austin, who admitted, “This is a big challenge. I have always wanted to be a head coach.”

The Steelers opened the 1966 season in Pitt Stadium against the New York Giants and much was expected of rookie Bill Asbury from Kent State, who they had picked up after his release by the Atlanta Falcons.

The Giants boasted the classiest corps of receivers in the NFL with former Steeler Earl Morrall at quarterback. New York’s kicker Pete Gogolak had jumped from the AF’s Buffalo Bills to the NFL during the off-season.

With just 1:12 remaining, Steelers Mike Clark nailed a 41-yard field goal to tie the game. After an interception, he was presented with another opportunity from 33 yards to take the win, but the kick veered left and the teams had to settle for the 34-34 deadlock.

The 83 yards and a touchdown contributed by Asbury should have given Austin some hope for the season ahead, but he didn’t see it that way. “There’s not much to be happy about when you’re fourteen points ahead and still don’t win,” said Austin. “I don’t have any use for ties.” 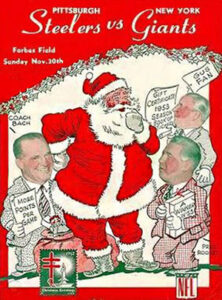 Three months later, the 3-8-1 Steelers traveled to New York to face a team with just one win to their name. Steelers coach Austin was returning to the stadium where he made his name as an offensive lineman.

The star for the Steelers was quarterback Bill Nelsen, who having missed nine weeks with an injury, had returned the previous week against Philadelphia where Pittsburgh lost 27-23. Austin suggested Nelsen floated his passes too much but attributed that to his layoff. “He’ll be zinging the ball next week, you can be sure of that,” suggested Austin.

In an unusually feisty battle for two teams in the league’s basement, the Steelers controlled the game from the outset when their opponents gave up a safety after the Giants punter fumbled a snap and the ball rolled out of the end zone.

Against the Giants’ young linebackers, Nelsen had an outstanding day completing 17 passes from 31 attempts for 322 yards and two touchdowns. He was complemented by two touchdowns each from Asbury and rookie Dick Leftridge as the Steelers compiled their highest points total for twelve years for a 47-28 victory.

Against a New York team that finished the season setting a new NFL record for points conceded (501), the coach certainly had a point.