The National Football League awarded their compensatory picks a tad earlier than thought this year and the Pittsburgh Steelers couldn’t be happier.

The Steelers were awarded a third round comp pick, the 105th selection overall, and it comes as quite a surprise. Common thought was that the team could get a fifth or sixth based only on losing Kelvin Beachum in free agency last year.

With Beachum was cut recently, turning his 5 year, 45 million deal into a 1 year, $5 million dollar deal, the chances of a third round comp pick seemed even more remote. It appears however the NFL viewed what Beachum signed for rather than how long he actually played there. Playing time likely played a role in this as well, given that Beachum played in 16 games, starting 15, and the free agents the Steelers signed, Ryan Harris and Ladarius Green, did not play very much at all. The Steelers will gladly take this and move on.

The following chart courtesy of Over The Cap may reflect things more clearly. The chart has been updated to reflect what the awards announced today.

This year is also the first time that compensatory picks can be traded. This doesn’t mean the Steelers will make such a move but it gives them the freedom to do so. Just as importantly, the third round comp pick gives them a very good chance to add important pieces to an already good team.

The NFL Draft is coming up on April 27th and runs through the 29th and this year it is held in Philadelphia. 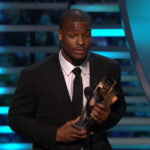