Steelers fans want change, but is it realistic? 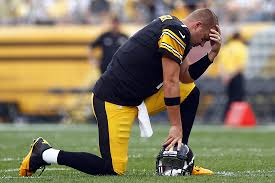 So you’re a Steelers fan, and as a fan you are obviously not happy with the team’s 0-3 start this season.

Who can blame you? I challenge anybody to say they are actually ok with what has transpired so far through the first 3 weeks of the season. Even if you pull out the, “we have to develop younger players to get better” card, you still know that right now those younger players aren’t all pulling their weight.

So you’re a fan and you aren’t happy and you want change right? “Change is needed” seems to be the catch phrase for the Steelers season so far, well that and of course Fire Haley! Just simply saying that change is needed is easy, but dive deeper and discuss exactly what changes you think are required and I bet you’ll see that there really isn’t much that can or will be changed now that the season is started. Like Mike Tomlin says, “we just have to execute better as a team, we acknowledge that, and we’ll continue to work towards that”. Man that drives you nuts doesn’t it?!

First off, what the Steelers have on the bench isn’t better than what they have on the field right now. Add on top of that that the Rooney’s won’t dump Mike Tomlin mid season; just in case you think he’s the main problem. On top of that, Tomlin won’t dump Todd Haley mid season either so we’re stuck with Fire Haley for at least 2013. Ya know, I think his name has been officially changed from Todd to Fire.

Running Backs – The Felix/Dwyer/Redman trifecta has showed us that none of them can carry the load full time. Maybe Le’Veon Bell is the answer but he’s not available yet. How many times do you want Tomlin to keep playing musical ball carriers and expect different results?

Offensive Line – This whole unit includes one first round pick and two second round picks, and they all are just flat out playing poorly. Inserting Kelvin Beachum at LT and keeping them there is a good idea because Mike Adams is just getting completely owned no matter who he faces. Do that though and inevitably someone is going to get hurt and you’re shuffling the line around again to compensate. Plus you also take out the option of using Beachum as another TE or short yardage blocker.

Receivers – Antonio Brown is fine, Emmanual Sanders underachieves and doesn’t run to the ball enough to be a consistent threat. Jerricho Cotchery is normally sure handed and reliable but he’s been inconsistent so far this year. I’d like to see rookie Markus Wheaton in the lineup simply because that speed is incredible and he’s got big play potential. You have to learn sometime so get him out there.

Tight Ends – Heath Miller is back which is great and he gives a boost to Ben but he’s not the main problem here. David Johnson can make plays and lets face it nobody expects him to actually get the ball when he’s wide open down the middle. David Paulson is a decent receiving Tight End but his blocking is beyond terrible.

Quarterback – No way you bench Big Ben in favor of Bruce Gradkowski at this point. Let’s just stop that nonsense before it even starts. Ben would have to string together another 10 games of similar performances before you’d consider benching him.

Defense – These guys are not the problem here, other than injury issue at MLB and CB, they are holding up as well as we can expect considering they are on the field all the time. William Gay continues to have his brain lapses but until Cortez Allen returns there’s nobody else who is on their level of play. Shamarko Thomas is the future but right now Polamalu is playing out of his mind and Ryan Clark is generally solid.
So changes need to be made? Ok fine but reazling that this team is what it is right now, and there just isn’t much you can change mid season that you can really bank on to make a difference.

If this Pittsburgh team is going to turn this season around it’s going to have to simply come from better execution and ball control from every player on the field for every minute of every game the rest of the year.

Attitude, Leadership Both Lacking on This Steelers’...

Some Final Thoughts on Mike Wallace in...

I have not said to anyone that they need to fire any coaches or change any players. I have been telling my family and friends that players as well as coaches need to be accountable and responsible for their crappy play. They need to stop playing like they just got out of middle school. There are too many mental errors game in game out. Mike needs to step up and coach the shit out of the players. That sounds like a dumb thing to say, but I have not seen any fire in him since last year. He needs to light up that fire like he did since he took over until 2011. Therefore, I agree with you wholeheartedly: we need to improve, period! Harder practices? Longer practices? Most likely both!