It was a little over three weeks ago, following a game against the Cowboys that Steelers’ team captain Cam Heyward posted this photo on twitter.

And I thought I could play this season. Just love being a Pittsburgh steeler! pic.twitter.com/m3UB1UYua6

Steeler Nation likely had a similar face, in finding out that Heyward would miss the rest of the season. At that time, we knew that in previous games that Cam missed (Miami and New England), the opposing offenses ran the ball at will against Pittsburgh’s depleted front-7.

Since Cam posted that photo, guys like Stephon Tuitt, Javon Hargrave, and Sean Davis have really stepped it up and have had a big hand in picking up the slack with the team’s best defender sidelined; and have stacked up 3 straight wins as a result.

I’m encouraged by the Steelers’ defense starting to get hot, and I think that the past few weeks probably did wonders for the unit’s confidence, but they haven’t seen a run game like the one they’re going to see on Sunday. I’m not trying to rain on any parades, but the Colts, Browns, and Giants rank 25th, 27th, and 31st in rush offense.

Where do the Bills rank, you ask? Number 1, with 162 yards per game and an incredible 5.4 yards per carry. No team has finished a season with a YPC number that high since the Vikings in 2012; the year in which Adrian Peterson was named MVP with 2,097 rushing yards. Really think about that for a moment. Peterson had one of the best rushing seasons in NFL history in 2012 and the Bills are quietly running the ball about as well (albeit with a few running backs instead of just one).

It looks like it could be a very Buffalo-like day on Sunday, with snow forecasted throughout the weekend, and temperatures being in the teens with the windchill. That’s when you run the ball.

Compounding issues further will be the fact that rookie Javon Hargrave looks like he will likely miss the game Sunday with a concussion. It would be a great week for Dan McCullers to play as big as he is, and really clog up the middle for guys to make plays.

I’m not saying the Steelers can’t win this game. I think that the Bills are a dangerous football team, and that Tyrod Taylor may not be great, but he is dangerous. The threat of him also running the ball really opens things up for LeSean McCoy. The front 7 has to be tough enough to deal with some of the big nasties on the Bills O-line but also disciplined in keeping containment on the Bills electric backfield combination.

If Keith Butler’s unit can bottle up the Bills run game this Sunday, it would go a long way in convincing this blogger that they truly are starting to put things together and have a shot at making some real noise once January rolls around. 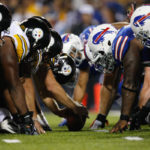