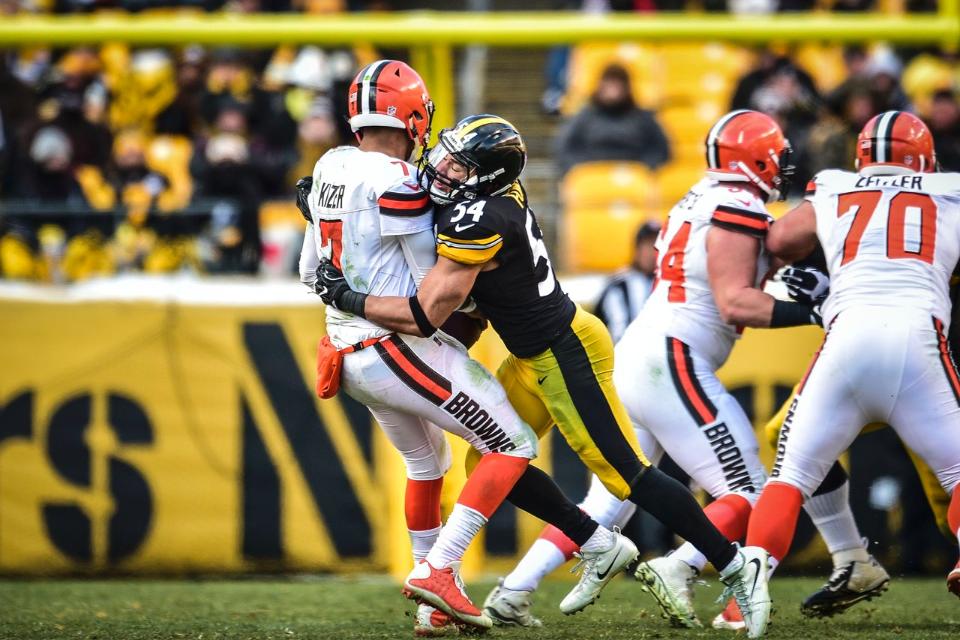 The Steelers concluded the 2017 regular season with a 28-24 victory over the Cleveland Browns that featured 6 sacks by the defense. Those 6 sacks lifted the Steelers team total to 56 on the season, breaking the prior team record of 55 sacks, set in 1994 and 2001. Additionally, the Steelers 6 sacks were enough to edge them past the Jacksonville Jaguars for the league lead. Jacksonville sacked Marcus Mariota 3 times yesterday but finished the year with 55 sacks.

This is the 8th time in Steelers history that the team has finished with at least 50 sacks in a regular season. They recorded 50 sacks in 1983 and 2002. The 1996 and 2008 teams recorded 51 sacks. In the 1974 season, individual sacks are an unofficial stat but team sacks are official, the Steelers recorded 52 sacks over 14 regular season games. As previously mentioned, the 1994 and 2001 teams had held the team record of 55 sacks. Now, the 2017 team holds the title thanks to Tyson Alualu’s fourth quarter sack yesterday.

This year’s team had a much different distribution of sacks than the 1994 and 2001 teams, which shows the changing structure of defense in the NFL and for the Steelers under Keith Butler. The two prior teams that held the record generated most of their pass rush from the outside linebacker positions. In 1994, Kevin Greene posted 14.0 sacks and Greg Lloyd had 10.0. The team also got significant contributions from ILB Chad Brown (8.5 sacks) and DE Ray Seals (7.0 sacks). Twelve different players recorded sacks for the 1994 Steelers. The 2001 team had a similar sack distribution as the outside linebackers led the way. Jason Gildon had 12.0 sacks and Joey Porter had 9.0 with rookie inside linebacker Kendrell Bell bursting onto the scene with 9.0 sack to set a Steelers record for rookies. Defensive Lineman Aaron Smith also added 8.0 sacks, which was a career high. Thirteen different players recorded sacks in 2001.

In 2017, the Steelers pass rush came from the inside rather than the outside. Additionally, Keith Butler continued to display his ability to mix-and-match blitzes from all over the field as 15 different players were able to get to the quarterback and record a sack this year. While the other teams were led by two primary outside pass rushers that both recorded over 9 sacks in the season, the 2017 team got their pressure up the middle. Defensive lineman Cam Heyward led the way with 12.0 sacks, becoming the first Steelers player since 2010 to record double-digit sacks in a season. Inside Linebacker Vince Williams recorded 8.0 sacks by using his dominant physicality to bully his way past running backs that tried to step up and block him. Outside rushers TJ Watt (7.0 sacks) and Bud Dupree (6.0 sacks) finished third and fourth on the team, respectively. Mike Hilton’s three sacks against Houston enabled him to finish the year with 4.0 sacks and Tyson Alualu’s two-sack day against Cleveland also brought his total to 4.0 for the season.

On the whole, 2017 was a dramatic improvement for the Steelers pass rush. Not only did they lead the league, but were also able to get contributions from across the board. They did not singularly rely on one dominant pass rusher but utilized a team approach to getting after the quarterback. Their 56 sacks were an 18-sack improvement over 2016 and a 23-sack improvement over the 33 sacks they recorded in Dick LeBeau’s last season with the team. In fact, the Steelers did not top 37 sacks in any of LeBeau’s last four seasons while they have recorded at least 38 in all three of Butler’s years. Keith Butler has obviously put his stamp on this defense in its structure and design. Three seasons into Butler’s tenure as defensive coordinator, the results are obvious as the Steelers did something that had never been done before in team history.