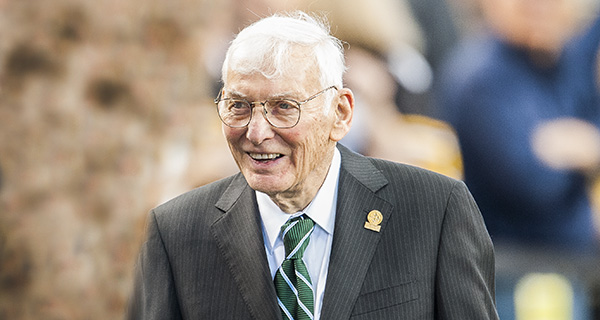 So many things in this world are inevitable. Some bring great joy while others bring tremendous sorrow. Today, we in the Steeler Nation must deal with the latter. Pittsburgh Steelers’ Chairman Dan Rooney passed away today at the age of 84.

This season, which has not even reached the draft yet, has already taken on a completely different look and feel now. Mr. Rooney will no longer patrol the fields of St. Vincent’s College in his trademark suspenders during the warm training camp period and he will no longer look down from his box in Heinz Field watching the organization his father Art purchased in 1933.

Mr. Rooney was truly one of a kind and as widely respected as any man could be. Being the owner of the most successful organization of the Super Bowl era brought attention but he always deflected it. His Steelers were never about him or anyone else in the front office. They were about the city and the fans.

Everything he did in football was about football, not just his Steelers. While many owners today make themselves the story and offer as much of themselves to the media as possible, Mr. Rooney did not. It wasn’t about him and never would be.

While the Jerry Jones of the world are celebrated for building gaudy stadiums and finding new ways to grow their own personal wealth, Mr. Rooney looked for ways to build bridges. Because of his leadership there are more black coaches in the game than ever before and more opportunities for them as well.

At a time when he could have easily continued to lead the Steelers he chose instead to serve his country. Under the nation’s first African-American president, Mr. Rooney would serve as the country’s ambassador to Ireland.

But that probably didn’t surprise those who knew Mr. Rooney. He learned from his own father that there was always a time to lead, a time to get out of the way and a time to give back.

We cannot deny the inevitable but we can take great pleasure enjoying what we had. There’s a reason Mr. Rooney was so well respected around the NFL and as fans of his team, we were given his front row seat to watch them every step of the way as he did. It’s exactly the way he wanted things.

Reaction to Tomlin Presser is Laughable