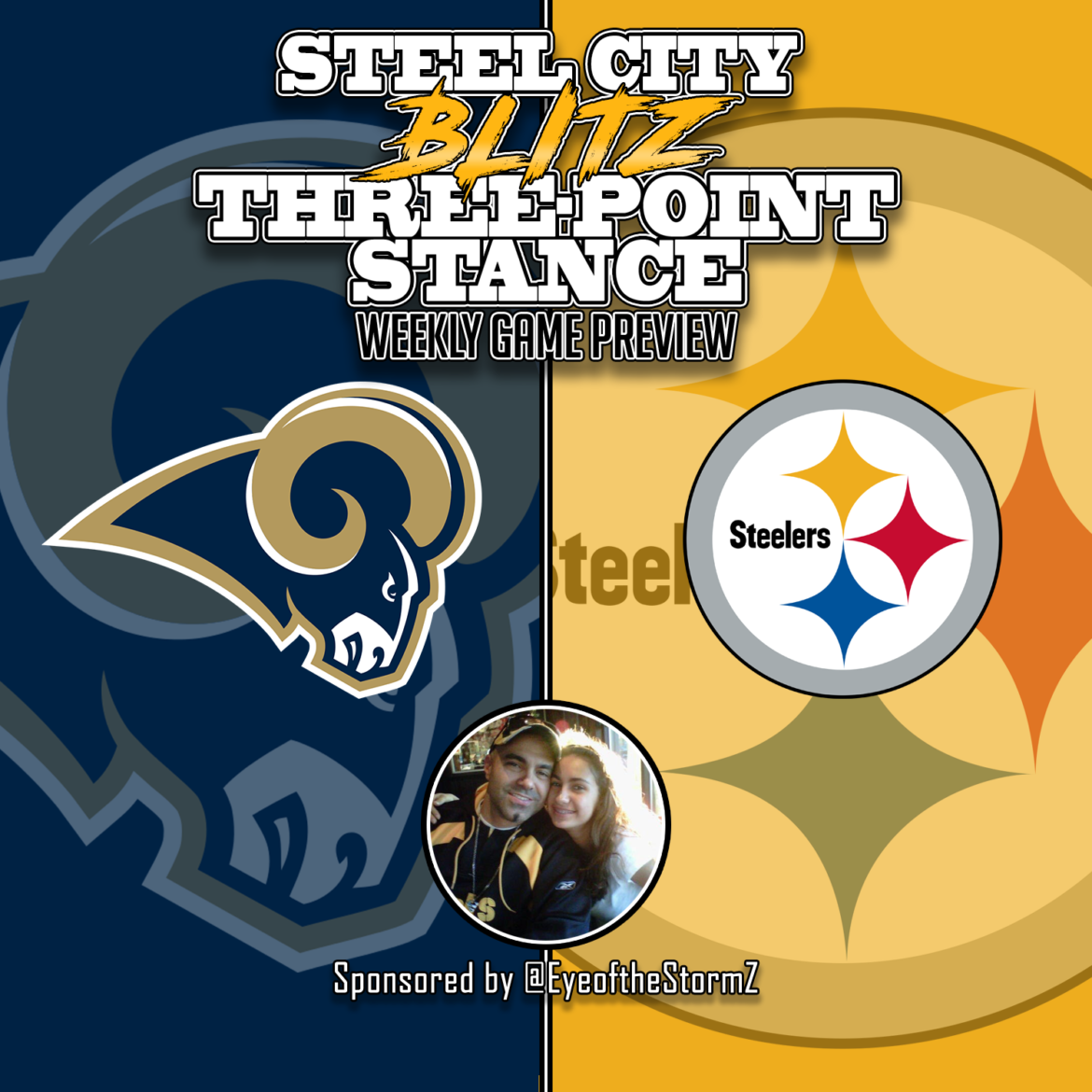 This is the Steel City Blitz Three-Point Stance. Your quick-hitting reference guide to everything you need to know about the Los Angeles Rams and Pittsburgh Steelers in this week ten matchup. The TPS is sponsored by @EyeoftheStormZ.

Last Week: The Rams enjoyed a bye week following their win over Cincinnati in London. Pittsburgh survived the Colts in Heinz Field 26-24.

TV Coverage in Your Area: Check out the coverage map from the506.com.

This Week in the AFC North: Baltimore at Cincinnati, Buffalo at Cleveland

What You Need to Know: The Steelers are 36-19-1 all-time at home against teams from the West Coast… Mike Tomlin is 8-4 against West Coast teams at home… Tomlin now has 125 wins… Jaylen Samuels set a team record for receptions by a running back last week with 13… The Steelers will celebrate the 40th anniversary of the Super Bowl XIV win over the Rams.

What’s at Stake: The Rams may be 5-3 but they’re third in the NFC West behind unbeaten San Francisco and 6-2 Seattle. They are in no position to drop games in the competitive division. The Steelers are in a similar boat as they try to keep pace with the Ravens who are two and a half games ahead on them in the AFC North. A loss to the Rams however isn’t terrible as it’s very low on the list of tie-breakers.

Get on Goff. Rams’ QB Jared Goff has not played well on the road this season and for you fantasy geeks, the Steelers’ defense has one of the lowest opponent QB outputs against it in the NFL. With the play of T.J. Watt and Bud Dupree, it must be expected that they will get pressure on Goff. He can be very indecisive in pressure situations and the sooner they get to him the better. He’s been sacked a total of 12 times this season but he hasn’t been taken to the turf in his last two games. Pressure from the inside always helps however and I think you’ll see some interior blitzes in conjunction with Cam Heyward and company. The bottom line here is that the defense can’t let Goff sit back there and throw without fear. If that happens it will be a long day for the defense.

The Ball Has to Go Downfield. Last week the Colts, too late in some opinions, finally started to address the issue before them that was Jaylen Samuels catching balls out of the backfield. Wade Phillips is unlikely to wait that long which means Mason Rudolph is going to have prove he get the ball down the field. No one is suggesting 15 yard dig routes here but what we’re talking about is the ability to hit receivers over the middle and on the move. This may be as simple as Vance McDonald getting open six to eight yards downfield but the ball has to go to people other than Samuels who will have many other responsibilities with Conner and Snell both out and perhaps Edmunds too.

It’s All About Third Down. Rams’ wide receiver Cooper Kupp is one of the best in the NFL at converting third downs into first downs and the Steelers will see him a lot in the slot. Sean McVay will likely have game-planned to get Kupp in advantageous match-ups. In other words, find ways to get him on linebackers or safeties. If Keith Butler and his defense can’t adjust it could be a long day. On the other side of the ball, Mason Rudolph will have to get good, pre-snap reads in order to find the best match-up. If he doesn’t know where he’s going then I suspect Phillips’ defense will find success getting pressure on him. Clearly getting in third and short situations will benefit Rudolph but either way he’s going to need to be efficient and decisive.

Predictions: I think most of us thought if the Steelers could come through the three-game home stand at 2-1 or better we’d take it. After winning the first two, winning on Sunday would be a cherry on top but it won’t be easy. Both James Conner and Benny Snell, Jr are out. Trey Edmunds is less than 100% which leaves Jaylen Samuels and unproven Tony Brooks-James. I think the Steelers’ defense keeps this game close but I’m not confident Rudolph has enough around him to get the job done.