Last season Marc and I decided to take a stab at throwing out several predictions with how the Steelers season would go. We hit some predictions right on the head, while others were way off.

We’ll do the same now (with some new perspectives as well) and review at the end of the season to see how we did once again.

Over/Under: 35 Touchdowns for Ben Roethlisberger
Chris: Over. This is tough, I think he’ll be right around this number. I’ll say over because he’ll be leaned on heavier in the first two weeks with Le’Veon Bell suspended.
Marc: Under. There’s an easy argument to be made that he’ll have to throw more if the defense is weak but I see somewhere in the 30-33 range. He’ll spread out those two 6 TD games this season.
Ben: Under. But it’s close. He’s never thrown for more than 32 in his career. The Steelers also seem to slow down on offense by the time Ben has thrown 3 because they typically have a lead by then and are trying to change the pace of the game.
All of this said, Ben may throw 5 TDs week 1 and it may not be enough to win.

Over/Under: 7 sacks for Jarvis Jones
Chris: Under. I hope I’m wrong here, but I just think Jarvis Jones is going to end up being more Clark Haggans than Joey Porter.
Marc: Under. I desperately want to say over here but I can’t because I’m hearing he still has wrist problems and I think sharing time with James Harrison will cut his chances down. That said, if he remains healthy, I believe he can get darn close to that number with some sacks that could be created by pressure from other guys.
Ben: Under. I think the Steelers are losing patience with Jarvis and that he will move into a role similar to Courtney Upshaw’s in Baltimore. He’ll play on obvious running downs and James Harrison will play Elvis Dumervil, coming in on obvious passing downs. This arrangement plays to Jarvis’ natural strengths and takes pressure off him to become the pass rusher the Steelers hoped for when they drafted him 15th overall. The limited snap count will also keep James fresh for the late season and playoffs. Harrison was a shadow of himself last year come January through no fault of his own.

Over/Under: 3rd Ranked Scoring Offense for Steelers (7th last season)
Chris: Over. I think that red-zone scoring is going to improve this season, and that the Steelers will go for 2 more often, resulting in a lot of points scored. I think that Pittsburgh and Green Bay will be fighting for the top spot.
Marc: Over. I’m not going to over-think this one. With the two-point conversion, the weapons and Big Ben at his best, I feel confident here.
Ben: Over. I think the O will be a very high scoring unit mainly because the defense is a work in progress and will put the offense in a position that they have to score big to win.

Breakout Player
Chris: Ryan Shazier. He hasn’t looked perfect so far, but I love that Shazier looks like he’s playing more instinctually. I think 100+ tackles this season is not out of the question.
Marc: Markus Wheaton. I’ve been very critical of Wheaton since he was drafted in the third round a few years ago. I think he struggled getting on the same page as Ben Roethlisberger early on but I have really liked what I’ve seen so far in camp. While everyone will look at Bryant as a red zone threat, I like the way Wheaton hustles and finds holes to get open. I think he’s in for a big year.
Ben: Martavis Bryant. Partly because Shazier was already selected by Chris. However, it’s also because Bryant is determined to be a better player. After scoring 8 TDs in 10 games last year, he went out and added 20 pounds to bring his weight up to 224. He’s much better at fighting off jams because of that weight/strength and also because he spent a great deal of time this offseason practicing hand fighting techniques at Jay Glazer’s gym. He worked on his quickness this year to give himself a better get off at the line.
In short, I think he has seen what hard work has done for Antonio Brown and is following suit. Richard Mann has done a fantastic job with this kid. I look forward to seeing what he can do with Coates.

Bold Prediction of the Season
Chris: Ben Roethlisberger gets serious consideration for NFL MVP. I’m not ready to say he wins it… but if Brady misses time and Peyton looks like he did at the end of last season, that’s two serious contenders down. Ben has so many weapons we could see some historic numbers.
Marc: Injuries will haunt the defense and will expose the lack of depth at safety and defensive line. I can see games missed for Mike Mitchell, Shamarko Thomas, Stephon Tuitt and Steve McClendon.
Ben: The defense, which looks downright awful today, gels over the course of 16 weeks and becomes a unit that can carry it’s own weight by the time the playoffs roll around. This shift in the team dynamic propels the Steelers into a deep playoff run.

Regular Season Record & Playoffs Results
Chris: 10-6 – I think that the offense is going to set records for the franchise, but the defense still seriously scares me. I think that the Steelers have a really tough road back to the playoffs. If Brady is out and they steal one week 1, that could be HUGE. I think that they squeak into the playoffs and get a 3 or 4 seed. I’ll predict 1 win and an AFC Championship loss, that will probably be on the road. I wouldn’t be shocked to see this team get back to the Superbowl though. I think that their biggest competition could be withing their own division in the Ravens.
Marc: 9-7, tie for 2nd with Cincy. Sixth seed in the playoffs. Out in Wild-Card Round. The daunting schedule will weigh heavily on the defense. I think the D will improve as the season goes on but red zone issues and special teams lapses still concern me with this team. The Steelers also play four road games outside the Eastern Time Zone where Mike Tomlin has not fared well.
Ben: 10-6, 2nd in the AFCN, 5 seed in the playoffs, 2-1 in the playoffs. Loss in the AFCC game. 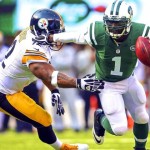 Is Michael Vick being a Pittsburgh Steeler worth abandoning your fanhood?

Possible Final Cuts that could Help the...

I see the Steelers going 10-6, but they have a very tough schedule with teams that have been traditional defensively strong. This is going to hold the offensive numbers down a bit. In order for them to become a top 3 offense they are going to have to overcome two things, red zone scoring and improved power run blocking [which hasn’t been here in quite some time]. As far as J.Jones goes i just hope he doesn’t consume too much playing time, he just not a very good player.As for pro bowlers goes i see the big 3 Ben, Bell, Brown. DeCastro doesn’t make it for 2 reasons 1, we have never been able to effectively run behind him and there are better guards in the AFC than him. In short i see us going 10-6 and maybe winning a wild card game. But i’m rooting for the Superbowl!

Well, Bryant WAS my choice for Steelers’ offensive playmaker this year, even over AB late in the year. That’s done and over with now.
Players say that over 50% of NFL players smoke marijuana. I just don’t get it. You have this huge opportunity in front of you and you throw caution to the wind to get high. You can do that when you retire.

Yeah. This news would change some stuff for me too. With such a tough schedule, the margin of error is so small that Bell and Bryant being dumbasses could very well be the difference between 8-8 and 10-6… which could keep us out of the playoffs.