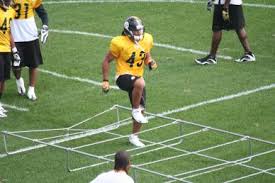 -Today is the first practice in pads today and it begins at 3pmET in Latrobe. If you’re going, here is your guide from steelers.com.

-The Trib’s Mark Kaboly reports the following from Day 3 at Steelers’ Camp… Guard/Center David Snow has a broken foot and will have surgery… RB Le’Veon Bell had some soreness in his hamstring but should be fine… Jordan Zumwalt moved back and forth between inside and outside backer… And this tweet of his I found particularly interesting “Amazing the command Mike Munchak has with the OL. Night and day from last year.”

-ESPN’s Scott Brown reports the following… Mike Adams was at right tackle today… Justin Brown was catching everything today… Cam Thomas was with the starters on defense at left defensive end… Markus Wheaton got between Shamarko Thomas and William Gay to catch a deep ball from Ben Roethlisberger.

-Ed Bouchette compares comeback of Sean Spence to that of Rocky Bleier.

-Dale Lolley of the Observer-Reporter talks secondary and how Shamarko Thomas says working out with Troy Polomalu was like being in a karate movie.

-The Steelers will not practice tomorrow as it is a scheduled players’ day off.

-Steelers’ guard Ramon Foster will return to the team today after being excused for a death in the family.

-Ben Roethlisberger and Antonio Brown were spotted working out on some play-action stuff during the team’s special teams’ period.

-Former Steeler Ryan Clark calls the Redskins’ secondary “the most talented he’s been around.” Just go to ESPN already Ryan….

-CBS NFL Insider Jason LaCanfora has no doubts that Ben Roethlisberger will be a ‘Steeler for life.’

-My son can’t stop watching The Longest Yard Bloopers so here is a clip of some great bloopers.

The Steelers Are Suddenly More Lightning Than...

Polamalu looks to return but credit Will...

Cowher Will Pull No Punches While in...

So yesterday I decided to make a 2014 53man Steelers Roster from the list that was put in the post gazette on the 20th. It was a little bit difficult but it’s only a 1st draft of the roster so here it is:

That is my 1st draft 53 Man roster list for 2014. All types of feedback are welcomed so give me your best shot.

Nice job Vittorio. I think you took some interesting guys to make the team over some favorites. My initial thoughts are that Kay will have to substantially better than Jones. If it’s even close, Jones gets it because the front office won’t want to admit drafting Jones was a mistake after a one year.

Wing over Podlesh for punter? I can see it, but I think they’ll like Podlesh’s hang time and accuracy.

Golden and McCain are interesting picks as well. The staff is very high on Antwon Blake and I know Tomlin likes Will Allen too.

Will Allen is with the Ravens and is suspended for the 1st 6 weeks of the season. Some of the DB’s and LB’s are there for ST’s as well and may get sparing playtime but that is to far down the road. Hey with the 3rd QB it’s based on nothing and hoping it’s something if you can believe that. I thank you for your comments and I want more feedback on my roster. I don’t care if it’s good or bad just give me feedback and I will respond the best way I can.

Will Allen is with the Steelers. You’re thinking of Will Hill…

Based on the spring, Kay outplayed Jones and I’m rooting for Kay. Want that Jones pick to haunt Colbert. Keep firing away and I’ll do my best to comment.

My bad Steeldad. I will redo the roster after the 2nd preseason game and see where that takes the roster. I know for some people it’s hard to try and pick out 53 guys for the roster but it’s not. 90% of the roster is common knowledge and the other 10% is 50-50 guesses. Anybody can do it. Heck I put 18 guys for 2-3 spots on the OL and the DB-S spots so take that with a grain of salt if you will.

You’re correct about 53-man rosters. Pretty easy until you get down to the depth parts. What I find a little more fun and challenging is trying to determine who is on the practice squad to begin the season.

That can be tricky seeing as how once the 4th preseason games is over you have literally hundreds of guys who are cut and are looking for any spot they can get but it becomes more difficult when you can only have at least 8 guys there.

I hope you guys heard Sanders say that P.Manning is a better leader than Ben for these 2 reasons:

1.He is the kind of guy to say after practice no matter what accolades he has

2.A guy who is easier to take down.

He also want on to say he had nothing but love and respect for Ben. Um does he not know that Manning while he has been to 3 Super Bowls he got his butt handed to him in the last 2. Okay fine Ben may have more INT’s than TD’s but he has 2 rings to his name and should have 3 at this point if not for the Super Bowl XLV loss. Ben does not need to throw for over 50 TD’s to have recognition. If you think about the last 2 QB’s to have 50 or more TD’s in a season what is it that they have in common: THEY BOTH LOST IN THE SUPERBOWL AND BOTH QB’s GOT THERE TEETH KICKED DOWN THERE THROAT’S. Yes I’m mad and no there wasn’t any other way to express my anger. So your thoughts on this rant of mine and the comments by sanders.