Status of Martavis Bryant Has Become Quite Interesting

Ed Bouchette isn’t buying the report that Martavis Bryant was inactive because of a knee problem if you heard him on 93.7 The Fan Monday.

Gerry Dulac said on Steelers Nation Radio he thinks Bryant could be out more than just one week.

Yet… There was Bryant on the field of Qualcomm Stadium last night running routes for Ben Roethlisberger for about 20 minutes prior to the Steelers’ win over San Diego. His route-running was described as “intense” by one of the pregame hosts on SNR.

Bryant wouldn’t be the first player to be listed as ‘out’ or ‘inactive’ due to injury and still be on the field doing some work. Every week NFL players take to the field hours before game time to test out injuries and see if they are capable of playing. What I find interesting here is that Bryant reportedly “tweaked” his knee last Monday.

The team did not issue any formal announcement as to why Bryant was not activated for last night’s game in part because they didn’t have to do so. The team is not obligated to report injuries on players who are currently active so therefore his actual status remains a mystery. If you’re looking for a comment from Bryant himself the only thing we have to go on is “soreness.”

That’s it. When asked about missing practice on Wednesday he confirmed it with just that one word.

Still, Bouchette is the long-time beat writer for the Post-Gazette and it isn’t like him to stir the pot. If he really does feel like Bryant isn’t hurt, then what else could it be?

Don’t be surprised if Bryant was serving a ‘team suspension.’ There’s no doubt in my mind that Mike Tomlin knows he needs to prove he’s in charge of this team and it has to be done with more than just taking away ping pong tables. He took some hits from Troy Polamalu’s comments when he decided to retire and there’s no doubt Tomlin has his favorites.

Will we ever know what is going on with Bryant? It’s doubtful. Dulac is well-known as the mouthpiece for the Steelers. He’s typically given the responsibility of floating out information to see what kind of reaction it gets. With his take being the complete opposite of Bouchette’s, I find the whole thing very intriguing.

Either way, I expect to see Bryant back on Sunday. 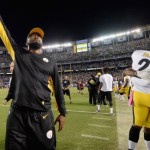 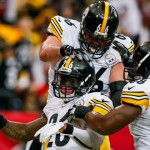