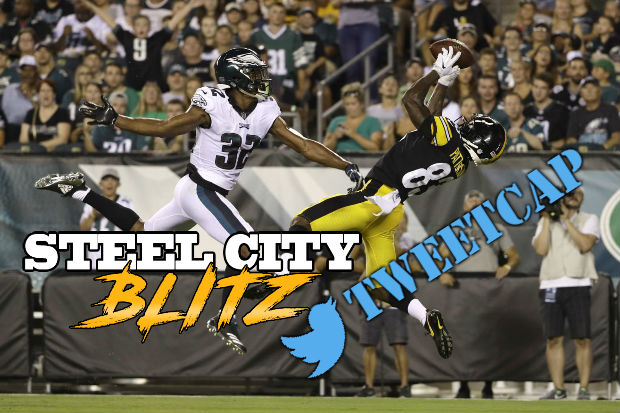 Steelers Football is officially back! The team (minus a lot of key starters) took the field tonight for the first preseason game against the Eagles. Even though it was a preseason game, Steelers Twitter was in mid-season form.

Everybody needs to relax. This is just the preseason. No need to get crazy. pic.twitter.com/8v3zUUfCeQ

In case you were wondering how the rotation would go on the inside with Foster out and Pouncey sitting.

Not the best start from the O-line, though

Someone forgot to tell Fletcher Cox it was preseason.

He just smoked DeCastro for a sack on 2nd down and chased down a screen from the backside on 3rd down.

Now get him out of the game, Doug.

It was apparent early on it was a preseason game

Nice little mix on D in coverage. Showed man off the snap, the juggernaut that is Nate Sudfeld appeared confused

Nice little mix on D in coverage. Showed man off the snap, the juggernaut that is Nate Sudfeld appeared confused

Bostic and Burnett with missed tackles. They're now officially #Steelers.

Then JuJu showed up

FOOTBALL IS OFFICIALLY BACK. #HereWeGo

Hope you were taking notes on that catch, @ijustine!! pic.twitter.com/f5jEdm2p20

JUJU ON THAT BEAT

It’s the preseason for everyone

Well, maybe not everyone

Either way, football’s back!

Saw a girl at Wal-Mart in an AB jersey getting arrested, football's back!!!

My dark secret is that I just love football so goddamn much and it’s so upsetting the NFL is one of the more evil cartels in America, which is saying something

The new rules are going to be something this year

We have our first "Lead with helmet" flag. Sidney Jones closes in from the flat and delivers a strike to a crossing route. Definitely initiated contact with the helmet; very tough spot to ask him to do otherwise, IMO.

hey Fichtner, Haley got fired for running a pitch on fourth and one, so let's cool it with the option on the goal line thanks #Steelers

?RUNNING AT THE GOAL LINE WORKS

Then the Eagles hit a bomb over Dashaun Phillips

Defense is in midsession form I see

Missed tackles and getting burnt on 50+ yard bombs. The Steelers are back baby.

Steelers special teams has been penalized twice for illegal formation….Tomlin has to be fuming

BJ Finney down. Remember when I said my biggest concern about Foster going down was our lack of center depth? Going to be tested now.

Dobbs to Patterson for a 29-yard TD! What a grab by Patterson. #Steelers

Great response from Dobbs there. Patterson ?

TD Patterson & he stuck the landing!

Mason Rudolph came on to start the second half.

why would the Steelers ever assign #14 to another wide receiver after Lima’s Sweed. They’ve killed this kid before he’s even had a chance

One of the stars of camp, Ola Adeniyi, made himself known with a strip sack

I’ve been trying to be chill AF about Steelers football being back… and I know its only preseason… but this is my inner self: pic.twitter.com/0wQq6mpEVX

Someone should tell @Shell that Monaca, PA is pronounced Mon-ack-a, not Mon-ah-ka.

??? I am sure the good folks of “Mah-knock-ah” Pennsylvania are delighted with the research the guy doing the voiceover for that Shell Polymers commercial did!! ???

Another contested catch by @JamesWashington

That’s what Washington does so well. Wins those contested balls. #Steelers

Damoun Patterson continued to ball, even in the 4th quarter

The connection is real #Steelers pic.twitter.com/8kigsJt5o6

.@SHEETZ IS BETTER THAN WAWA. 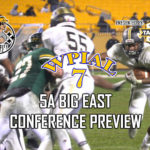