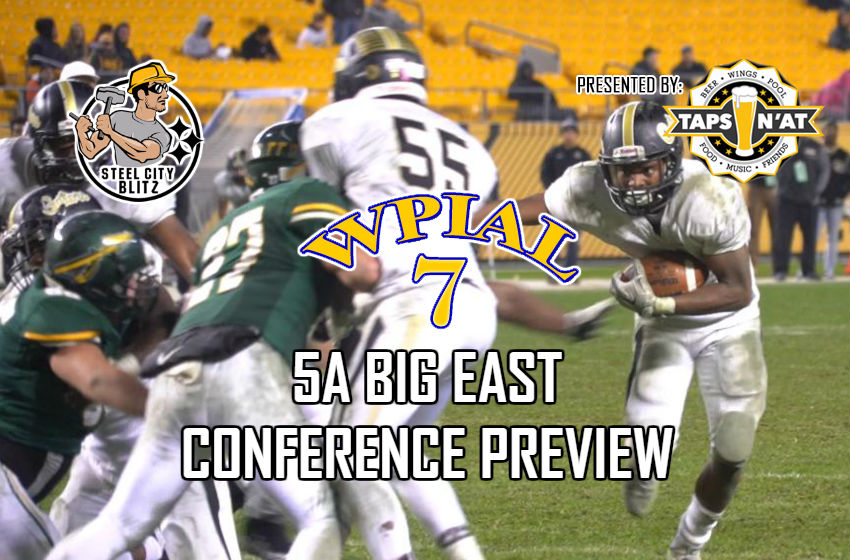 Over the last two years, 5A has produced some of the most exciting playoff games in the entire WPIAL. The realignment cycle added 6 teams to the 5A ranks, which resulted in 3 conferences with 8 teams in each. For this season, 16 teams will make the playoffs. This means the top 5 from each conference will automatically qualify for the postseason along with one sixth place team based on the Wild Card formula. Unfortunately, the downside of the increased number of teams is that the WPIAL 5A Championship will be played at Norwin High School rather than at Heinz Field. The 5A Classification is loaded with good teams that have strong football traditions which should make for a great season. The WPIAL, in their infinite wisdom, named both a 5A Conference and a 3A Conference the “Big East” for this cycle, rather than calling this group the”Foothills Conference.” Back in the 4-classification era, the AAAA Foothills Conference contained Penn-Trafford, McKeesport, Latrobe, and Connellsville, along with stints by Gateway and Plum.

The Gators broke out last season and claimed their first WPIAL title since 1986 by running the gauntlet of Woodland Hills, McKeesport, and Penn-Trafford in the playoffs. They went on to reach the PIAA Championship Game where they fell to Archbishop Wood. Gateway had reached Heinz Field 4 times between 2004 and 2009 but fell short each time. Last year’s run was spurred by the emergence of freshman RB Derrick Davis who ran for 439 yards and added 480 receiving yards and scored 11 TDs. Nearly all of that production came during the playoffs which put him on the radar of D1 schools and landed the rising sophomore a number of high-profile offers from Big Ten and ACC schools. Gateway will have to find a new quarterback this season, possibly Brendan Majocha who saw some spot duty last year. He will have the aid of returning the WPIAL’s leading receiver Courtney Jackson who compiled a single-season record 1916 yards and 27 TDs en route to the state final last year. Jackson has already committed to Syracuse. Fellow rising senior Jeremiah Josephs was the second-leading receiver with 582 yards and 6 TDs and has committed to Miami (Ohio) as a defensive back. All in all, the defending WPIAL champs return a loaded lineup and should be considered the preseason favorites in 5A.

In 2016 the Warriors missed the playoffs for the first time in 13 seasons then responded in 2017 by winning the Big East Conference title, earning the #1 seed in the playoffs, and reaching their second WPIAL Championship game in 3 seasons. Unfortunately, their year came to an end with a 21-16 loss to Gateway. Junior Gabe Dunlap and sophomore Ethan Carr will likely compete for the starting quarterback role. Whoever wins the battle will be aided by the return of two quality offensive skill players. Leading receiver Dimitri George (406 yards) returns for his senior season and second-leading rusher Caleb Lisbon (814 yards, 15 TDs) will be a junior. Senior RB Jon Peduzzi ran for 7.8 yards per carry in limited work last year and figures to see a bigger role. Penn-Trafford had the best defense in 5A and the second-best offense last season and should once again be right in the mix at the top of the conference.

Over the last two seasons, McKeesport and Gateway have played in some epic battles, including two WPIAL semifinals matchups. McKeesport won the 2016 semifinal on a hook-and-ladder hail mary while Gateway scored a late touchdown to win 28-21 last season. The Tigers use a wishbone triple-option rushing attack that has produced video-game like numbers over the last few seasons. Unfortunately, all 3 of their primary contributors from last season graduated. Senior Konota Gaskins figures to take over the QB role, but probably will not be asked to throw much as McKeesport only averaged 3 pass attempts per game last year. Gaskins has attracted some attention from FCS schools as a safety. Marcquis Butler (163 yards, 2 TDs) is the top returning rusher. Seniors Rahmon Powell and Devin Sims both averaged over 5.5 yards per carry last year and will take on bigger roles. Keep an eye out for big-play threat Devari Robinson who averaged 7.6 yards per carry as a sophomore.

Tough, hard-nosed, defensive football has become the hallmark of the Franklin Regional program. The Panthers have made the playoffs in 14 straight seasons, winning the AAA title in 2005 and reaching the semifinals 4 more times. They played a number of close low-scoring games last year, capped off by a 6-3 loss to Upper St Clair in the playoffs. Senior QB Adam Rudzinski threw for 1090 yards and 10 TDs last year and added 224 yards and 2 TDs on the ground. The top returning receivers are Mike Evans and Devon Powell who were big-play threats last year, both averaging over 20 yards per catch. In the backfield, Rudzinski may have to take on more of a dual-threat role as the top returning rusher is junior Zack Gordon who averaged 5.6 yards per carry in limited work last year.

The Wildcats have not made the playoffs since 2009, but there is some reason for hopefulness heading into this season. Despite a 4-6 record last year, Latrobe was competitive over the last month, losing by 1 to Armstrong and by 3 to Franklin Regional. Coupled with wins over Plum and Connellsville, those 4 points were all that separated Latrobe from a playoff berth. Senior receiver Zakharee Williams (448 yards, 7 TDs) is the top returning skill player. Senior Jacob Burkey and junior Branden Crosby will likely have a preseason battle for the starting QB spot. Paul Siminovitch figures to step in to the lead back role after running for 5.3 yards per carry last year. Two-way lineman Trent Holler has attracted the attention of a number of D1 schools, including offers from Pitt and West Virginia.

The Mustangs got off to a strong start last season with wins over Kiski and Franklin Regional in the first 3 weeks, but went on to win just 1 of their last 6 games. Junior Anthony Little (489 yards, 6 TDs) and senior Hunter Linhart (103 yards, 1 TD) split time at QB last season. Little is also the team’s top returning rusher (126 yards, 1 TD) as most of the other starting sill players graduated. Sophomores Billy Guzzi and Reed Martin will be called upon to take on bigger roles in the offense this year. Plum should be right in the mix for the last playoff spot in the conference this season. The Mustangs play Latrobe in Week 7 which could determine the final playoff spot.

The Colonials are less than two years removed from a 31-game losing streak which spanned from Week 4 in 2014 to Week 8 in 2016. They built upon their 1-win 2016 campaign by doubling that total last season. Albert Gallatin pulled off one of the biggest surprises of the season when they topped West Mifflin in Week 3 by a 28-27 margin. However, the realignment cycle boosted them from 4A where they played fellow Fayette County teams Laurel Highlands and Uniontown up into 5A where they will face more difficult opponents. A quartet of rising juniors will look to lead the Colonials to contend for their first playoff berth since 2005. QB Domonick Lewellen threw for 1141 yards and 9 TDs last year, leading rusher Javon Davis had 404 yards and 5 TDs, and WR Torry Robinson had 250 yards and 1 TD. Swiss Army Knife Christian Stone accounted for129 rushing yards, 196 receiving yards, and scored 3 times.

The move to 6 classifications has not been good for the Falcons, who went just 1-9 each of the last two seasons with their only wins coming in Week 0 against Uniontown. Connellsville has lost 16 straight conference games, the longest current streak in the WPIAL. One of their biggest issues was personnel distribution as four players split time at QB last year. Rising senior Jared Ozias threw for 226 yards and 3 TDs and also was the team’s leading receiver with 158 yards and 3 scores. Fellow rising senior Dylan Bubarth attempted the most passes but only threw for 166 yards and 3 TDs while also being the team’s third-leading rusher with 138 yards and 1 score. Gage Gillott and Josh Maher also saw time under center last year as sophomores. Second-leading rusher Bodee Stonebraker (279 yards, 3 TDs) and second-leading receiver Jalen Rogers (156 yards) also return for their senior seasons. If the Falcons are going to make a run at their first playoff appearance since 2014 they will need to improve on both sides of the ball where they had the worst offense (7.8 PPG) and defense (48.4 PPG) in 5A last year. 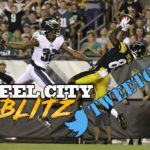