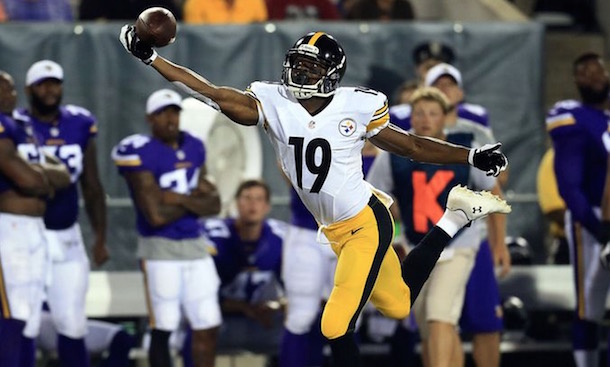 Nine times out of ten when you bring an undrafted free agent rookie into camp the expectation is that he’ll be just another body, but it’s that one time that a diamond in the rough can be found.

Perhaps Shakim Phillips is just such a jewel. Virtually unknown to most Steelers’ fans prior to Sunday night’s Hall of Fame Game, Phillips burst onto the scene with two catches for 43 yards. One of those catches was far and away the Steelers’ highlight of the night.

Phillips extended for a Landry Jones’ throw and reeled it in with one hand as he went to the ground. Even in higher scoring and more exciting games this would have stood out but when the offense can only put up three points the play takes on added significance.

Prior to camp, the Steelers’ receiving corps looked to be pretty well solidified. Antonio Brown, Markus Wheaton and Martavis Bryant are the three constants while rookie Sammie Coates and special teams guru Darrius Heyward-Bey are thought to complete the five-man grouping.

With Dri Archer’s performance on Sunday, it’s likely he will be the third running back. He can also play wide receiver which means the team will likely go with five receivers. That’s where Phillips comes in…

The former UConn Huskie and Boston College Eagle can make it very tough for Head Coach Mike Tomlin to cut him if he has another good game on Friday night in Jacksonville. While it’s likely his number of plays will come down a bit with the veterans seeing a little more action, what he does with those plays he does have will be huge for his future.

If you couple his strong performance with the disappointing showing by C.J. Goodwin then Phillips suddenly has the opportunity to make it difficult on the Steelers’ staff.

Heck, if he can come up with some plays on special teams then maybe DHB is in trouble as well…

It’s a competition isn’t it…

Phillips isn’t competing with Coates. There’s no way Coates doesn’t make the roster as a third round pick. Phillip is battling for the 5th WR spot plain and simple. Or…. If he can, force the Steelers to keep 6 WRs which I don’t see happening.

With the limited number of practices the depth chart is somewhat predetermined. And the order on that chart is also, This is one of the areas where the Steelers lack often times the better player is on the bottom of that chart.Thats why i say best man up. as examples we have Beacham, Blake, Mcain, Bryant and i also feel Josh Harris deserves a closer look. There is some talent on this roster but the lack of a rotation, and with the starters playing the entire game make it very difficult to evaluate and culture talent.

I get that Phillips is making things difficult for Tomlin but I would rather have Coates and not just because he is more well known from his time down in Auburn but also because I honestly fell he would be the better option and I know a lot of fans will come on this site and bash for me for saying that but I want Coates for his size and ability to stretch the field and it would also give Ben another Big Weapon to use downfield along with Bryant. However I reserve the right to change my mind on this situation when I fell like changing my mind.

I also think Coates was a good pick.