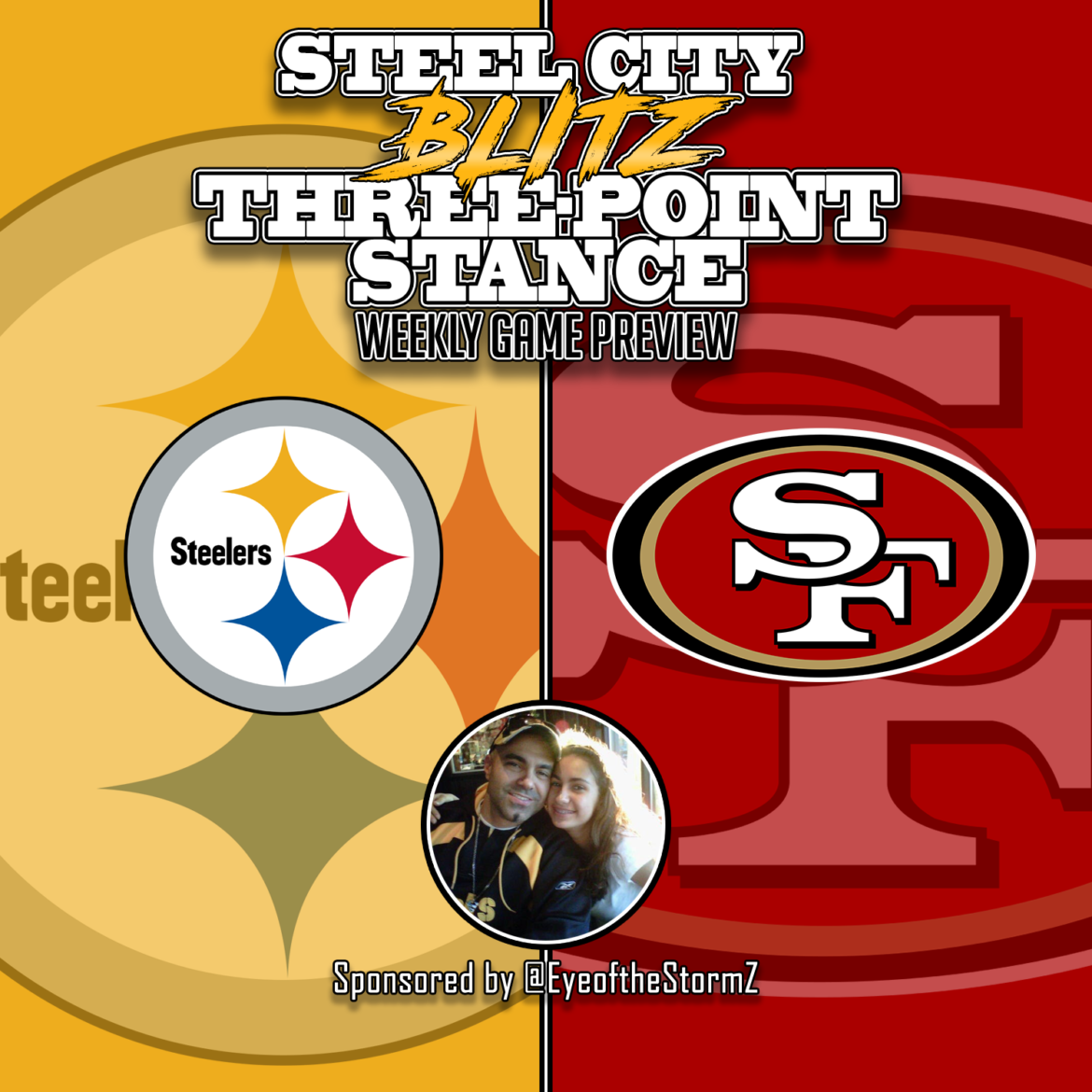 This is the Steel City Blitz Three-Point Stance. Your quick-hitting reference guide to everything you need to know about the Pittsburgh Steelers and San Francisco 49ers in this week three matchup. This is sponsored by @EyeoftheStormZ.

Last Week: The 49ers won on the road for the second straight week by defeating Cincinnati 41-17 while the Steelers dropped a 28-26 contest to Seattle in Pittsburgh.

TV Coverage in Your Area: Click Here to see if the Steelers are on in your area!

This Week: Baltimore at Kansas City, Cincinnati at Buffalo, LA Rams at Cleveland

What You Need to Know: The Steelers are 4-19-1 all-time with a first time starting quarterback and they are 2-8-1 on the road… The last QB to get a win was Ben Roethlisberger in 2004… This will be the first game for newly acquired Minkah Fitzpatrick who will wear number 39… San Francisco is 1-12-1 ATS in its past 14 games as a favorite… Dating back to 1996, the two teams have alternated wins in their last five games with the Steelers winning the most recent contest… The Steelers are 19-39 all-time in Pacific Time Zone games.

What’s at Stake: The Niners find themselves in a three-way tie atop the NFC West with the Rams and Seahawks and need to take advantage of their first game at home to keep pace. The Steelers are banged up and begin life without Ben Roethlisberger while trying to keep from falling three games behind the rival Ravens in the AFC North.

Shut Down and Turnover Garoppolo. Jimmy G is averaging 8.9 yards per pass and he has one of the game’s best tight ends in George Kittle. Both of those things are bad for the Steelers because their pass defense is a mess and they haven’t been able to cover a tight end consistently since the late 1970’s. Therefore, in order to slow down the offense, the Steelers need to make Garoppolo hold the ball longer than he wants to and ultimately turn him over. During his career, he’s shown time and time again that he’s willing to just toss the ball up for grabs at times. He did it last week in Cincinnati when he tried to find his receiver deep while surrounded by five Bengals’ defenders. Kyle Shanahan will surely adjust as the Seahawks did last week. Keith Butler can’t be caught with his pants down again or it’s going to be a long day by the bay.

Run, Mason, Run. I’m not suggesting that Mason Rudolph is Forrest Gump here. What I’m saying is that any young quarterback’s best friend is an effective running game. The Steelers have not been able to run well in either of the first two weeks. The Pats and Seahawks have solid defenses and the team was behind the entire game in week one so that has to be considered. That said, enough is enough. Let this offensive line that we’ve all been told is one of the best do their damn jobs and block the way for James Conner and company. This takes pressure off of Rudolph and sets up the play-action and screen game that can keep the Niners’ defense on their heels. If Rudolph has to throw 40 plus times on Sunday then I don’t see a positive result for the team.

Step Up to Free Up JuJu. The big concern with JuJu Smith-Schuster’s transition to the number one receiver was not whether he could do it or not. It was whether or not someone could emerge as a legitimate number two threat. So far, that has not happened and JuJu has suffered as a result. Donte Moncrief has been an incredible disappointment so that means Mason Rudolph may have to turn to a trusted friend in James Washington. The only other option is Diontae Johnson. The moral of this story is quite simple. We need someone to step up in order to get less attention paid to JuJu. If this doesn’t happen then the Steelers’ offense will struggle.

Predictions: Everything… And I mean EVERYTHING seems to go against the Steelers’ chances of wining Sunday. Mike Tomlin’s numbers on the West Coast, playing a 2-0 team in their home opener, starting a new QB for the very first time and deploying a defense that is suspect to say the least. Despite the addition of Minkah Fitzpatrick, my confidence in this defense is extremely low. I believe Mason Rudolph will play well enough to win but the defense has given Kyle Shanahan too much ammunition to work with.