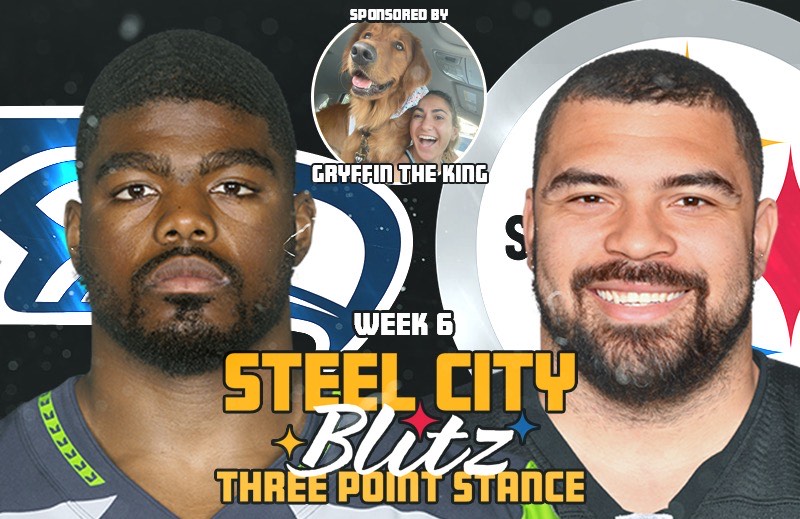 We have arrived at week six of the NFL’s 2021 season. Here’s everything you needs to know about the Seattle Seahawks and the Pittsburgh Steelers in this primetime tilt.

Last Week: Seattle lost QB Russell Wilson to a finger injury and lost the game at home 26-17 to the LA Rams. Pittsburgh snapped a three-game losing streak by beating Denver 27-19 at Heinz Field.

Head Official: Shawn Smith. Smith is now in his 4th season as a head official in the NFL. Last season, Smith oversaw Steelers’ games against Houston, Buffalo and the playoff loss to Cleveland. In those games, his crew averaged 7.2 penalties accepted per game.

Injury Notes: The Steelers enter this contest a little more healthy then they have in recent weeks. Seattle however is banged up on offense with their starting QB and RB both out.

This Week in the AFC North: Cincinnati at Detroit 1pm, LA Chargers at Baltimore 1pm, Arizona at Cleveland 405pm,

What You Need to Know: Seattle is 63-32-1 in primetime games since 1970. That’s the best winning percentage in the league over that time (min 50 games)… The Steelers are 29-25 all-time on Sunday Night Football… Mike Tomlin is 9-7 at home in Sunday Night Football games… Pittsburgh has more wins (69) over NFC opponents since 1970 than any other AFC team… Tomlin is 39-15 overall in the month of October… Ben Roethlisberger is now sixth overall in all-time passing yards after he leaped over Dan Marino on Sunday… Big Ben is 41-20 all-time versus NFC opponents.

What’s at Stake: Both teams are 2-3 and looking up in their respective divisions. A win for either team means getting back to .500 while a loss could send either team further into the doldrums.

1. Build on Your Success. Denver entered last week’s games with one of the top defenses in the NFL yet the Steelers found a way to establish the run and had some success throwing as well. Seattle enters this week with the League’s worst defense. If you truly want to be “a good football team” then you have to build on what you did the week before and establish your dominance over a weaker opponent. I fully expect to see the young offensive line creating holes for Najee Harris and I expect them to improve upon their pass protection as well. These things don’t necessarily equate to a victory but they should go a long ways toward that goal.

2. Put It on Geno. My first word of advice to all Steelers’ fans is that you should not underestimate Geno Smith. You don’t last as long as he has in this league without some ability. With a full week of preparation I expect him to be better than he showed last week when he entered for the injured Russell Wilson. Keith Butler and his charges need to make Smith earn everything. Last week’s pressure on Teddy Bridgewater was not up to our usual standards and I expect to see that improve. Forcing Smith to get the ball out sooner than he wants to will be critical. T.J. Watt looked better than he did in Green Bay but I still sense he’s not close to 100% yet. As many coaches have said, “if you’re on the field then I expect you to perform as usual.” Let’s hope he, Alex Highsmith, Cam Heyward and company can make life miserable for Smith from the get go.

3. Who Steps Up? Remember this past summer when James Washington requested a trade? The injury to JuJu Smith-Schuster is exactly why you don’t trade a player like Washington. He’s exclusively a boundary wideout so therefore, who becomes the slot receiver? There’s some speculation that Chase Claypool may actually spend some time there. Understand that it’s all about matchups and of the Steelers can use Claypool, Diontae Johnson, Ray Ray McCloud or Steely McBeam to get those matchups then they will. But… who steps up? Someone has to be the guy to catch the crucial third down throws and someone has to be the guy setting the edge with consistent blocking. If no one takes up that mantle then the Steelers’ offense becomes lesser than what it was.

Prediction: The Steelers took some really big steps last week in terms of the growth of their offense and offensive line. That was against a Denver defense that was ranked near the top in many categories. Now they face a Seattle defense that ranks dead last. I see no reason not to establish Najee Harris again and set up those third and short situations which leads to overall success. Defensively, the Steelers have to pressure Smith. They must create situations where he’s uncomfortable and makes mistakes. If they give him time and allow the Seattle running game to prosper then they’ll be on their heels and that’s never good. I think ultimately we see just where this Pittsburgh team is right now. I expect a win but I don’t expect it to be easy.