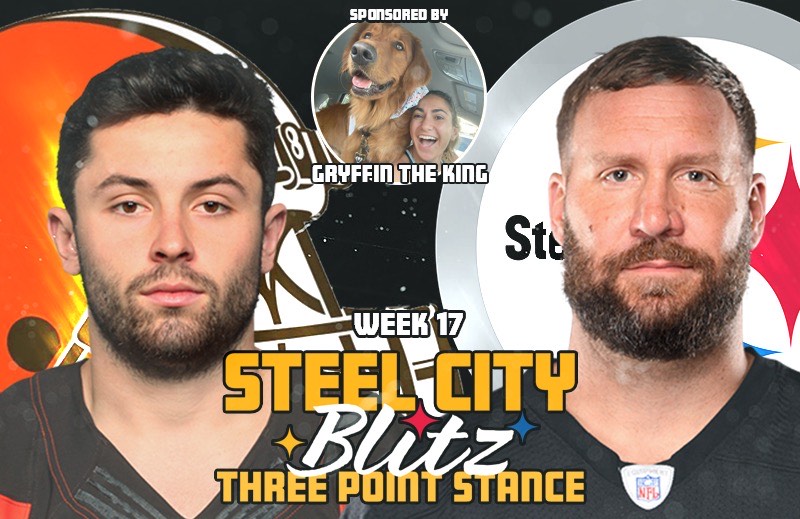 We have arrived at week 17 of the 2021 NFL season. Both the Cleveland Browns and Pittsburgh Steelers face ‘must-win’ situations this week. Here is everything you need to know as the Turnpike Rivalry continues on Monday Night Football.

Weather: 27 degrees with winds around 6mph

Last Week: The Browns went into Lambeau Field and lost 24-22 to the Packers while the Steelers were soundly beaten in Kansas City 36-10.

Head Official: Brad Allen. The Non-Profit CEO is in his 8th season as a head official in the NFL. The last time the Steelers saw Allen was in week seven of 2020 against the Ravens. Allen most notably officiated the Steelers’ 45-42 playoff loss to Jacksonville.

Injury Notes: Don’t be surprised if JC Hassenauer gets the nod at Center… Buddy Johnson has been a classic case of “you can’t make the club, if you’re in the tub.” He’s been inactive or hurt all season… Malik Jackson being out or banged up at the very least could help the Steelers. ALSO: Don’t forget Chris Wormley and Joe Schobert are both OUT due to Covid.

This Week in the AFC North:  Kansas City at Cincinnati 1pm, LA Rams at Baltimore 1pm

What You Need to Know: Cam Heyward has registered seven or more sacks in six seasons… Najee Harris needs 16 yards to reach 1,000 in his rookie season… Pittsburgh is 50-25 on Monday Night Football… They are 28-5 at home on MNF… The Steelers are 39-12 in home finales and they are 14-1 in such games against the Browns… Pittsburgh is 64-36-4 all-time against QBs drafted number one overall. They are 35-18-4 in such games at home… Mike Tomlin is 23-5-1 all-time against Cleveland… T.J. Watt needs 2.5 sacks to reach 20 on the season.

What’s at Stake: Both teams HAVE to win in order to keep any legitimate postseason hopes alive. A win by the Bengals over the Chiefs gives them the AFC North so the division title is not out of question for either team. In other words, it’s feast or famine.

1. Stop the Run. Yep, it’s really that simple. Last week in Green Bay, the Browns chose to put the ball in the hands of Baker Mayfield and it cost them. The running game was averaging nearly eight yards per carry. I can’t see the Browns making the same mistake this week especially playing the Steelers and their horrendous run defense. Keith Butler and Mike Tomlin have to come up with one hell of a gameplan to slow down Nick Chubb and company. The defensive line has to keep blockers from getting to the next level. If the linebackers are being blocked all day then we can forget it.

2. Be More Aggressive. With Wormley and Schobert out, it’s going to be even more difficult to slow down the Browns’ rushing attack. Therefore, Mike Tomlin should look to be more aggressive offensively. Sending out Chris Boswell time after time isn’t not going to match what the Browns could be doing. Now if the Steelers are forcing turnovers or field goal attempts then OK, play it wisely, but I think Tomlin has to let Ben Roethlisberger take some chances where he may otherwise not.

3. Let’s See Some Common Sense. No one can outthink themselves more than an offensive play-caller. Matt Canada has done this several times this season and he didn’t twice last week. If you’re going to use some ‘trickeration’ then set it up. Don’t call for a flea-flicker on the second series of the game when you haven’t even come close to establishing the run. And don’t call for a toss sweep on fourth and short with your 220 pound running back. Let the offense get things established before things get crazy.

Prediction: On the podcast this week I suggested the Steelers would win a ‘field goal fest’ on Monday night but I’m starting to re-think this. There are three reasons why. First, in the initial matchup, the Steelers limited the Browns’ rushing attack significantly and Cleveland will want to rectify that. Second, the Browns are coming off of a devastating loss where their running game should have carried them to a win if not for their greedy play-calling. I don’t see that happening two weeks in a row. Lastly, with both Wormley and Schobert out, I see no chance of stopping the Browns’ running game enough to keep them from moving the chains. Big Ben will go down swinging but it won’t be enough to counter a miserable defense.