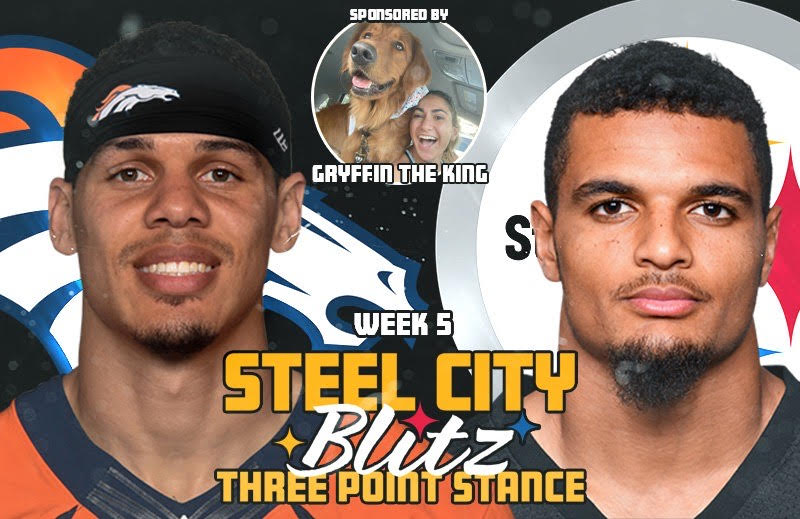 Hard to believe but we have already reached week five of the 2021 NFL season. Here is everything you need to know about this Sunday’s game between the Denver Broncos and the Pittsburgh Steelers.

Last Week: The Broncos lost their first game of the season to Baltimore 23-7 while the Steelers dropped their third straight game losing 27-17 in Green Bay.

Head Official: Brad Rogers. He begins his third season as a head official. This will be his first time officiating a game as the referee for the Steelers.

Injury Notes: Bridgewater is expected to start if he clears protocol which he is expected to do… The Steelers’ secondary rotation will be worth watching with Sutton out… Personally, I’d go with Cody White to replace Washington this week. I like what he’s done in limited action.

What You Need to Know: T.J. Watt has 19 forced fumbles in his career. No one has more since he entered the league in 2017… No team has more rookie starts on offense in 2021 than the Steelers (16)… Pittsburgh is 77-33-1 under Mike Tomlin in 1pm kickoffs… The Steelers are 80-11 under Tomlin when they win the turnover battle… Ben Roethlisberger has thrown touchdown passes to 53 different players in his career… Ben Big needs 274 yards passing to pass Brett Favre for third all-time in passing yards by a QB with the same team… With one more sack Cam Heyward would break the record for most sacks by a Steelers’ defensive lineman with 60.

What’s at Stake: The Broncos are in a three-way tie for first in the highly competitive AFC West. While early, Denver will see this as an opportunity to pick up a key AFC Road victory… Pittsburgh has already reached ‘must-win’ status. They are two games behind the rest of the AFC North and cannot afford to fall further behind.

1. It’s Time to Step Up. Ben Roethlisberger and his offensive line both need to step it up this week. With Von Miller licking his chops at a chance to take down the less mobile QB, both have to be on the same page. Roethlisberger needs to get back to the guy he used to be which is easier said than done. My feeling is he can’t keep worrying about the rush. It’s going to be there anyway so why not settle in, stick to your mechanics and throw the ball like you’re capable of doing? As for the O-Line, it’s week five now. We saw some signs of progress last week especially in running the ball but things still have a long ways to go. It’s high time that everyone step up here.

2. Slow Down the Run. Last year when the Broncos came to town they ran the ball extremely well. We surmised that some of that had to do with Mike Munchak, the former Steelers’ O-Line Coach, who knew how to attack the Steelers’ run D. I suspect we’ll see some more of that on Sunday as Denver tries to take advantage of the absences of Tyson Alualu and Stephon Tuitt. In order to slow down Denver, discipline is required. The OLBs have to set the edges. The defensive linemen have to have gap discipline and the linebackers have to consistently find their fits. Melvin Gordon and Javonte Williams will look to find the gaps and creases and if the Steelers can’t routinely stop those it will be a long afternoon.

3. Attention Receivers! Make Plays! I get it. How can you make plays if the QB isn’t getting the ball to me accurately? When he does, the receivers have to start doing more with it. No more running back behind the sticks. No more routes that don’t get to the markers and for god’s sake catch the ball. This entire offense’s outlook can be changed for the better just by making a few extra plays and I think we’ll see those this week. As close as Big Ben and JuJu were to some big plays I’m going to view that positively and trust that those will happen this week.

Prediction: While there is still a long way to go in 2021, I view this game as a true ‘must-win’ contest. A loss would be their third straight at home. That’s something that hasn’t happened since 2006. It would also be their third straight home loss to start the season. That hasn’t happened since the 1980’s. Therefore I think this team rises to the occasion. It won’t be pretty and I don’t have any expectation that it will be but I believe this defense will create at least two turnovers and I think the offense will create just slightly more points than we’ve seen lately behind Najee Harris.