The Pittsburgh Steelers spend the first of their three holiday games in Indianapolis for a Thanksgiving showdown with the Colts. I’m giving you everything you need to know heading into this crucial AFC match-up for both teams.

Where: Lucas Oil Stadium Indianapolis, IN

What You Need to Know: Ben Roethlisberger is now 20-2 against Cleveland… He has as many wins as any Cleveland QB since First Energy Stadium opened…

What’s at Stake: The Steelers need to put the ball in Baltimore’s court as the Ravens host the Bengals Sunday. A Steelers’ win puts the pressure on the Ravens to keep pace in the AFC North.

All-Time Series: Steelers Lead 16-6 and they lead in Indianapolis 5-4

Spread and throw at Will. Last week, the Steelers rightfully came out and pounded Le’Veon Bell into the Browns at will. They were 31st in the league against the run and with the high winds, it was the smart play. This week, the Colts enter as the 31st worst team in the NFL against the pass and they may be without one half of their secondary. Todd Haley needs to go three and four-wide while keeping Bell in the backfield. His heavy reliance on multiple tight end sets has a time and place and this is neither the time nor the place. Ben Roethlisberger has too many weapons at his disposal to not attack this defense through the air.

Punish and Punish Some More. The Steelers’ Defense recorded eight sacks last week. This week, they play the only other offensive line that has given up more sacks than Cleveland. Keith Butler was relentless with his blitzing last Sunday against a young and old quarterback but this week he might have to be a little more judicious with the Colts. Yes, Scott Tolzien is making his third career start but the talent around him is better than what the Browns had. That said, I think you’ll see plenty of five-man rushes but they’ll be of the zone variety where guys will be coming from everywhere. Regardless, he needs keep steady pressure on Tolzien.

Tomlin Needs to be “Cautiously Aggressive.” In the loss to Dallas, I thought Tomlin went to the well too often on his two-point conversion trys and then last week I thought his gambles at the end of the half were uncalled for. I don’t think people realize just how close that game could have been had the Browns’ penalties not bailed us out. 6-0 would have been significantly different than 14-0. Don’t get me wrong, I like Tomlin’s aggressiveness, but it has to be done wisely and with caution. This team isn’t good enough to keep allowing teams to stay in games.

I’ll get right to it… There is no way Mike Tomlin’s team can afford to lose against a Colts’team that is this banged up and especially without Andrew Luck. I expect the Colts to play hard and keep this game closer than expected simply because it’s on national TV and they don’t want to be embarrassed. That said, Ben Roethlisberger needs to get rolling early and the defense needs to pick up where it left off. 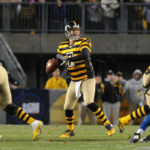