SCB Steelers Three-Point Stance; What We’re Looking for Against the Panthers

The term ‘must-win’ game is often over-used in my opinion and I’ve already heard it thrown around about the Pittsburgh Steelers’ match-up with the Carolina Panthers. While I obviously would feel much better with a win this weekend, make no mistake; this is not a must-win game.

The Steelers have Tampa Bay, Jacksonville and Cleveland in the three weeks following Sunday night’s game and those are all very winnable. Yes, you’d like to win every game but let’s be honest about things too shall we?

Here’s what we are looking for heading into the game.

1. Pass protection must actually protect. The Panthers have recorded seven sacks in two games and the Steelers haven’t exactly been the picture of good pass protection. It gets worse when you take into account comments this week by Ben Roethlisberger who says he’s still sore from that hit in Baltimore more than a week ago.

Marcus Gilbert must bounce back from a rough two games where he’s given up four sacks. While it starts with him, the whole line needs to play better and that will start with communication. The hit that Big Ben took was the result of Baltimore using Courtney Upshaw as a spy. As soon as Ramon Foster left him, thinking he was falling into coverage, Upshaw had a clean shot.

This is where the communication has to pick up in order for the passing game to thrive.

2. The Defense must win on first down. Dick LeBeau’s defense is giving up over five yards per rush. Normally this would call for some type of capital punishment but it’s still early so we’ll hold off for now. The good news for the defense is that Carolina currently ranks 25th in rushing and is averaging just 3.1 yards per carry.

In other words this is the classic “something’s got to give” scenario. The defensive line has to occupy gaps and guys and they can’t give ground either. Cam Thomas has to get off of the roller skates he’s been on the first two games and stuff the run. If the defense can stop the run on first down they stand a much better chance of limiting Cam Newton in play-action. In other words, take away the run on first down.

3. Discipline has to be there. The Steelers have been penalized 20 times this season which ranks them third behind New England and San Francisco. They lead the league with three unnecessary roughness penalties as well. Whether you feel those were legitimate or not doesn’t matter because they were called and they influenced the Baltimore game especially.

It isn’t just penalties though. The offensive turnovers and missed assignments have haunted this team for several years now and with less talent, those things become magnified. The Steelers have to be more disciplined on Sunday night. 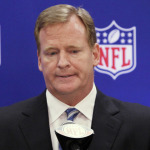 The Time for Roger Goodell to Go is Now