Good day Steelers’ fans wherever you are! Let’s get to it!

Mike Tomlin spent more time going over injuries during his weekly presser yesterday than he did any other topic. The most alarming injury in my opinion is the turf toe injury to Eli Rogers who will miss a second straight game. Turf toe may not sound like much but it can end careers. Just ask Steelers’ Hall of Famer Jack Lambert whose career ended for this reason. The only thing that can make this injury better is rest. Therefore might not see Rogers for awhile.

Right tackle Marcus Gilbert remains on crutches and in a boot. Let’s just go ahead and rule him out for Sunday. His replacement, Ryan Harris, suffered an injury to his lower leg Sunday and is listed as “questionable.” I think he’ll play but if he doesn’t that means Chris Hubbard starts against the Jets who may have the best defensive line of pro football.

Other injury tidbits… Rob Golden, Ryan Shazier, Rosie Nix and Ramon Foster all have a chance to play if things go right this week. Cody Wallace remains out while Darrius Heyward-Bay (shoulder) should be available but will be limited during the week.

The consensus among the SCB crew was that Artie Burns would likely play only special teams in his rookie campaign. As he raw as he is, we figured learning was his biggest chore in 2016. Well, wouldn’t you know it? Burns leads the Steelers in pass breakups right now with four. He played nearly the entire game on D Sunday as well.

This was my latest ‘Mini-podcast.’ Enjoy!

‘Nail the Number’ is back today! Check out your two goals to win the jackpot!

Tweet of the Day… Big Ben gave this young lady his glove. I think she’s excited.

If you missed my review of the Steelers through the first four games here it is.

The Steelers will wear the ‘bumblebee’ throwbacks on Sunday for what could be the final time for awhile. Steelers’ PR man Burt Lauten told me this morning that there will be some news coming this week regarding the throwbacks. Stay tuned.

David DeCastro has the sixth-longest streak right now in terms of starting guards in the NFL. He’s started the last 44 games.

The Steelers are 7-1 all-time at home versus the New York Jets. 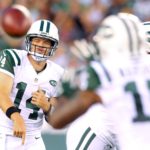