Good Thursday to you Steelers’ fans and happy Draft Day!

I’ve seen some pretty awful headlines in my time, in fact, I’ve written many of them myself. But what I saw yesterday from a Yahoo Sports writer may have taken the cake as they say. In the moments following the announcement of Ben Roethlisberger’s new deal, this came from Frank Schwab who gave this title to his article: “Steelers, who didn’t pay Le’Veon Bell or Antonio Brown, paid Ben Roethlisberger a ton” You’ve likely heard of clickbait before right? Ya know? A title that just MAKES you click on it only to find the story doesn’t match up nearly as well as you hoped… I don’t even know what this title falls under but ‘clickbait’ isn’t the word. I’m not going to insult your intelligence by going back over the sagas of Bell and Brown because you damn well know the Steelers bent over backwards for Brown and offered Bell far more than he’s now making with the Jets. This title is about a dislike of Roethlisberger. It’s about pushing a narrative that never should have existed. It’s about trying to get clicks for a news source that’s dying faster compact disc sales. Schwab owes the Steelers and Roethlisberger an apology if you ask me. I’m just an idiot blogger – not a real writer – and even I know better than this.

Stay up to date with all of our Steelers’ Draft Preparation with everything from Prospect Profiles to mock drafts. Click on the link right here. You see the final mock drafts by Eli, Greg, Cnic and myself!

Catch up with our latest Steel City Blitz Podcasts presented by 26shirts.com/Pittsburgh! We have Draft previews of all of the offensive and defensive positions!

Tweet of the Day… In case you wondered what our main enemy would be doing in this draft.

Here are the Ravens' top three needs heading into the 2019 NFL draft:

As of this writing there is a lot of speculation that the Steelers will draft Temple CB Rock Ya-Sin. I like this kid a lot and I believe he’s going to be a very good player in the NFL. I do not view him as a first round talent but if I put myself in the Steelers’ shoes for a moment… It is highly likely he won’t be there at 52 and I know other teams have similar grades on him so is it better to reach a bit and get him or not get him at all (sans a trade up)? I feel like there’s better talent at the position and better talent available at other positions as well at 20.

Remember this, the Steelers and Kevin Colbert are VERY good at Draft smoke screens. Be careful what you take to the bank.

Remember this part II… Regardless of who the Steelers draft the majority of Steeler Nation will hate it.

Our plan right now is to be recording the Steel City Blitz Steelers Podcast presented by 26shirts.com/Pittsburgh while the Steelers are on the clock tonight. I guarantee you will hear a variety of instant feedback that will range from complete anger to a large “ho-hum.” Don’t miss it.

Have a great day Steeler Nation and enjoy the Draft! 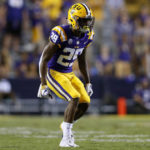