The Pittsburgh Steelers have been busy this off-season. You may not like all of the things they’ve done but considering their overall situation I think Kevin Colbert and company have done yeoman’s work. One item that is yet to be done is a new deal for T.J. Watt. Twice he has finished second for the Defensive Player of the Year and twice he’s been All-Pro. In other words, he’s going to get paid. The Steelers only question remaining is when? Usually with a monster deal like this the Steelers have traditionally flipped this switch during the month of August. There are currently two guys, Chris Boswell and Stephon Tuitt, that are candidates for contract restructures. Should we see those things occur that could mean they are working towards a Watt deal. Understand that this is not a matter of “if.” It’s a matter of when and believe me, T.J. Watt will have enough money to buy all of us some Primanti’s for lunch. I just don’t think it happens until this summer.

It was great to be back on the show after my little vacation to Florida last week. With four weeks to go until the NFL Draft we did our best to break down where we think the Steelers are headed. We also discussed the return of Tyson Alualu and a whole lot more. Click to listen to the SCB Steelers Podcast presented by DEK Roofing, Inc.

Tweet of the Day… This is a really good point by Nick.

Tomorrow is the moment of truth to see how serious this Zaven Collins interest is from the Steelers.

If Tomlin and Colbert are there, it's very, very real. They don't attend Non-P5 Pro Days often. When they do, it's for guys like William Jackson III at Houston. Gonna be telling.

Two guys that could be on the Steelers’ radar were in action yesterday in Stillwater, OK. Tackle Teven Jenkins (5.03 40 and 36 reps on the bench) and RB Chuba Hubbard (4.48 40) both had really impressive showings. Jenkins is a beast who plays with a nasty, until the whistle type of attitude. Hubbard is coming off of an injury-plagued 2020 but his 2019 season proved he can be a bell cow with breakaway speed. One guy I thought would test better was cornerback Rodarius Williams but his 4.50 40 was a little disappointing. On today’s agenda are the following schools.

The big name here is Collins who Nic referred to in his tweet above. The Steelers don’t draft non-Power 5 guys under Kevin Colbert in the first round unless your name is Ben Roethlisberger so I don’t see him being an option but man is he talented. In Bloomington, the Hoosiers have a couple of guys worth watching in Safety Jamar Johnson and WR Whop Philyor. 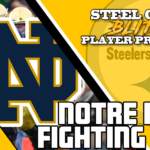 Pickett’s Hand Size is Concerning But Not...