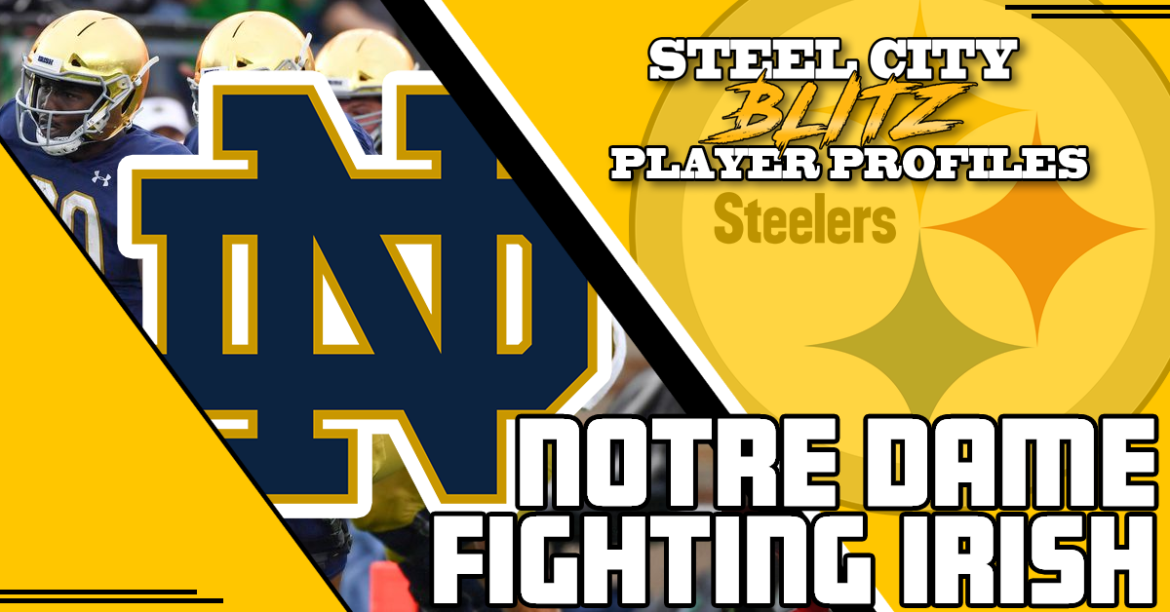 The collegiate Pro Day circuit is in full swing. Kevin Colbert and Mike Tomlin have been making their rounds to the premier schools to evaluate some of the top talent for this year’s NFL Draft. Recently, both Tomlin and Colbert appeared at Notre Dame’s Pro Day. The significance of this is that the last 10 first round draft picks by the Steelers all had both Tomlin and Colbert in attendance at their Pro Days. Additionally, Notre Dame’s run to the College Football Playoffs ended their season ranked in the Top 10 in the AP Poll. In Kevin Colbert’s tenure, 16 of the 20 first round picks have come from schools that finished the year in the AP Top 25. Here is a look at the 13 prospects that took part in Notre Dame’s Pro Day, which has an extra importance this year with no Combine.

Banks was a key component of Notre Dame’s offensive line this season, earning recognition as a first team All-American. He is a massive human being who uses his strength to bulldoze defenders out of the way. Banks is likely best suited to play in a power running scheme. Given his size, he can tend to play a little high and does not necessarily have the agility to pull around the edge as a lead blocker. He needs some work on his hands, but should still hear his name called in the middle of the draft.

Ogundeji was a bit of a late-bloomer for the Irish. He did not step into the starting role until his senior season, but he rewarded the faith of the coaching staff with a team-high 7 sacks. He was recognized for his leadership abilities as a team captain. Ogundeji has good size and length for playing as a 4-3 defensive end. However, he lacks explosiveness off the ball and doesn’t have the agility to make quick adjustments when the runner cuts back. His best asset is his strength, and he can force his way into the backfield to make plays.

Skowronek played the first four years of his collegiate career at Northwestern before finishing as a graduate transfer at Notre Dame. He has battled through injuries as a leg injury ended his 2019 season after just 3 games. He also suffered a fracture in his foot during the Senior Bowl week, which kept him out of Pro Day activities. Skowronek has great size and solid hands and can win battles down the field against corners in combat catch situations. He is a decent route-runner and comes out of his breaks quickly, but doesn’t have the long speed to run away from faster defenders so he needs to rely on his size and hands to win the ball. Overall, he’s likely a late-round flier that could be a boom-or-bust type prospect, as his injury history does present some concerns.

Wright was primarily a blocking tight end in Notre Dame’s offense. He was not very productive, accumulating just 7 receptions for 78 yards and 1 TD over his entire career. That said, he tested very well at the Irish Pro Day and profiles as highly athletic for his size at the position. He ran a great 40-yard dash and shuttle drill, which certainly helped his draft status. Nevertheless, given his incredibly limited collegiate production, he will likely be a late Day 3 pick at best. His athletic upside and leadership abilities should get him some attention, at least as an undrafted free agent who can be a serviceable blocking tight end.

Hayes played rotationally on Notre Dame’s defensive line since his freshman season. He redshirted in 2019 due to a shoulder injury, after having suffered a separated shoulder in high school. Those lingering injury concerns will put an extra level of importance on his medical testing. He came back for the 2020 season and had 6 tackles for loss, 3 sacks, 1 interception, and 2 forced fumbles. Hayes was a team captain who was hailed for his leadership and character and was elected a team captain. On the field, he has good footwork and hands but lacks strength and refinement in his pass rushing repertoire. He was not incredibly productive and lacks some explosiveness to get upfield quickly.

The Ian Book experience led to a lot of victories at Notre Dame, but he was never quite good enough to take them over the top. Book was a dual-threat quarterback who was capable of making plays with his legs as well as his arm. However, he was a bit undersized and lacked the arm strength to make throws outside the numbers. Typically, undersized quarterbacks have to rely on accuracy but Book was not great in that department either, completing just 65% of his throws during his career. The one good side is that he does not throw a lot of interceptions (though when he misses he tends to miss high which can lead to picks in the NFL). He was at his best on simple RPO reads where he had the option to run or throw to his first option. Additionally, Book was able to use his escapability to make some plays outside the pocket. He is likely a Day 3 developmental pick and should not be handed the reins of an NFL offense immediately.

McKinley had a tumultuous career at Notre Dame that finished on a high note. He broke his leg halfway through his freshman year and missed all of the following year while he recovered. In early 2019 he was arrested for reportedly punching campus police officers and suspended. He returned in the fall of 2019 and saw rotational duty before stepping into the starting lineup as a senior with 717 yards and 3 TDs. He is tall and strong and uses his size well to get position on defensive backs. Like Chase Claypool before him, McKinley is a physical receiver who bullies smaller defensive backs. He does need to work on his footwork and does not have great explosiveness off the line or out of his breaks.

JOK is one of the top inside linebacker prospects in the draft, up there with Penn State’s Micah Parsons and will almost certainly be a first round pick. He is coming off a junior season where he won the Butkus Award as the nation’s top linebacker and was named the ACC Defensive Player of the Year and a first-team All-American. Over the last two seasons the explosive linebacker wowed with his speed and closing ability, recording 24.5 tackles for loss, 7 sacks, 5 forced fumbles, 4 fumble recoveries 1 interception, and 7 passes defended. Notre Dame moved JOK all around the field, lining him up at safety, inside linebacker, edge rusher, and even against slot receivers. He is fast and physical and looks right around the ideal combination of size, speed, and athleticism for a modern inside linebacker. JOK is somewhat reminiscent of Clemson’s Isaiah Simmons who was a bit of a safety-linebacker “tweener” last year. He has the skills to man up in coverage on running backs or tight ends and can also be a devastating A-gap blitzer.

Eichenberg started at left tackle for the Irish in every game over the last 3 seasons. He was a second-team All-American and first-team All-Conference in 2020 and was a finalist for the Outland Trophy. He is a very good run blocker and might be best suited to play right tackle in the pros. As a pass blocker, Eichenberg was solid and consistent, but didn’t do many things that “wow” you either. He is much better driving forward then sliding back into a pass blocking stance, and when he lost it tended to be when an edge rusher came with speed and beat him to the corner. He needs some work on his hand-fighting technique but overall is a solid tackle who may garner attention at the tail end of the first round in a fairly deep tackle class.

McCloud was another graduate transfer that came to Notre Dame after playing at NC State. This came on the heels of McCloud missing nearly all of the 2019 season with a knee injury. He rebounded with the Irish in 2020, recording 8 passes defended, 2 tackles for loss, 2 fumble recoveries, and an interception. He played out on the boundary and his athletic profile is very solid with good times in the 40-yard dash and in the agility drills. His injury history may give some teams pause but he will likely get a look as a potential Day 3 cornerback in a league desperate for defensive backs.

Hainsey started his high school football career at Gateway High School in Western Pennsylvania before transferring to Florida powerhouse IMG Academy. He saw time at different positions along Notre Dame’s line over his career, playing both guard and right tackle (as the aforementioned Liam Eichenberg had the left tackle spot locked down). He finished his collegiat career at right tackle. Hainsey was hailed for his leadership as a three-year starter and two-time team captain. He is a bit undersized for an NFL tackle, but his change-of-direction drills (3-cone and shuttle) were very strong. Hainsey may find himself in a “swing” lineman role, able to step in at either guard or tackle, though his best future fit may be at guard. He has good hands and can pull out in space to lead the way in the run game, bot can be a bit top-heavy and doesn’t have the lower-body power to bowl people over.

Crawford battled through knee injuries during his time at Notre Dame. He tore an ACL before his freshman year then suffered another knee injury in fall camp during his senior season. In 2019, he suffered a dislocated elbow which kept him out of two games. He was granted a 6th year of eligibility for 2020 and was a team captain. He timed well in the speed and agility drills, but he is very undersized for an NFL defensive back. Crawford was a productive defensive back when he was on the field, finishing his career with 5 interceptions, 3 sacks, and 12 passes defended. Given his injury history, he is likely looking at being an undrafted free agent that will look to make an impact on special teams in training camp.

Kraemer started his career in South Bend as a right tackle as a redshirt freshman. He slid in to right guard as a sophomore. His junior year was cut short with a sprained MCL but came back for his senior year and earned first-team All-Conference recognition at right guard. He has good strength and hands on the interior of the line to battle with defensive linemen. Kraemer is a mauler and will use his strong frame to push defenders around. That said, his footwork is subpar and he can get caught leaning or reaching with his torso out ahead of his feet – both in run and pass blocking.

NFL bloodlines, his father Greg played safety for the Cowboys and Eagles
Good combination of receiving and blocking skills
Gritty, willing blocker
Can block in both run and pass games
Athleticism is there but hasn’t matched production
Had some drops
Not very productive (35 career catches for 401 yards and 4 TDs)