Last night Ian updated one of his most important articles and published it for your reading pleasure. I’m including the link to it here. In a nutshell, Ian breaks down the Steelers struggles when they leave the Eastern Time Zone. What’s truly incredible about this week is that the Steelers have lost three straight in Oakland. It’s one of just a few cities that Ben Roethlisberger has never won in. But to make it even more painful is that those three came against Raiders teams that combined to go 8-40 in those three seasons. While any loss in Oakland is bad, a loss this week would be potentially devastating. With New England and New Orleans on the docket in the coming two weeks, there is no margin of error for the Steelers. The time is now to put an to the craziness of the their west coast trips.

I think  you’ll see Jaylen Samuels start Sunday but I also believe Stevan Ridley will get a decent amount of snaps. With the Raiders’ run defense ranked near the bottom of the league it goes without saying that the Steelers have to create a meaningful running game.

Remember when Fournette was at LSU…and everyone said he was the next coming of AP? Yea, I don’t either

We already know that Bud Dupree is dealing with a pectoral issue. Now it looks like Anthony Chickillo will be less than 100% also. That means a very thin OLB group again this week…Switzer is now fully out of concussion protocol so he should be available… Ben made an excellent point in our nightly discussion about Marcus Gilbert. Maybe the should have just put him on the IR and brought him back later… The amount of guys on the injury report shouldn’t be that alarming. As the old saying goes “no one is 100% at this point in the season.”

One year after his horrible injury, Ryan Shazier was doing dead lifts. Truly amazing and inspiring.

The Post-Gazette’s Ed Bouchette is calling for computer chips to be installed in footballs to help determine first downs and touchdowns. I understand the logic but I disagree. In fact, I’d rather go in the opposite direction and eliminate instant replay period. Football managed along just fine for how many decades before it? Now it seems as if technology has only created more problems when it was supposed to fixed them. Get off my lawn!! 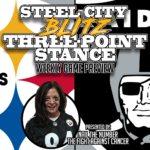