As the NFL Players’ Association Player Reps speak today about whether to move forward with a full membership vote on the CBA proposed by the owners, veteran players are starting to offer their two cents. J.J. Watt, brother of Steelers’ star T.J., tweeted yesterday that this agreement gets a “hard no” from him. Roger Sherman has already voiced his displeasure citing the fallacy of ‘player safety.’ One bone of contention is the “fully funded rule” which basically comes down to guaranteed money. I’m not going to get into the finer points here but the players aren’t crazy about it. If two-thirds of the NFLPA Reps agree to the deal then they would take the issue to a full membership vote. The bad news here is that if there isn’t an agreement then this could likely be put on hold until the end of the 2020 season. At that point the owners would have substantially more power so the NFLPA has to be very careful here.

Interesting move, indeed. Can’t imagine this is going over well with the team reps. Feels like it significantly weakens their roles in this process. https://t.co/4SR8QsCENv

Can We Please Stop?

Most of you know me well enough to know that if I’m wrong, I admit it. And when you spend a good part of each day ruminating on the Steelers like I do you’re bound to be wrong sometimes. One thing I feel pretty confident about is this notion that Le’Veon Bell will return to the Steelers. Why on Earth would the Steelers want to bring back a player who chose to sit out an entire year rather than make $15 million and compete for a title? I get it – there’s a lot more to it than that – but we need to stop with this idea that he comes back here. He was a complete non-factor for the Jets and I don’t see him being much more than that in Pittsburgh.

Tweet of the Day… I ask myself this often.

Is there a new strand of stupid going around or what?!?

With all the talk about Bud Dupree I wonder what happens with guard/center B.J. Finney. We’ve long been supporters of his as a future starting guard and we like him there much more than we do at center. That said, I’m starting to wonder if he even has a future in Pittsburgh. He’s probably going to get some lucrative offers to start around the league which is fine but I really think the Steelers staying with Foster this long ma prove to be a mistake should Finney leave.

Earlier this week the Steelers named former Florida Gator, NFL receiver and nine-year NFL coach Ike Hilliard as their new Wide Receivers Coach. I like the hire for the simple fact that this is a guy with good experience as both a player and a coach. He brings immediate respectability to the staff and in the eyes of his players. 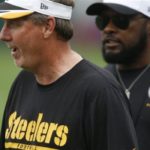 Looking at the Steelers’ Coaches Through the Eyes of a Coach