Good Tuesday to you Steelers’ fans!

Pittsburgh Steelers’ Quarterback Ben Roethlisberger will be getting an update on his surgically repaired elbow on February 21st according to numerous media outlets. If he’s given a green light he will be able to start throwing tennis balls and other light items. Let’s think about this for a moment shall we? The last football Big Ben threw was on September 15th. That means he will have gone over five months without throwing anything. My point is that this is going to take time. I do not expect him to be throwing productively until July and there’s no guarantee that things will progress smoothly. At his age and with this type of surgery (three tendons were re-attached) anything is possible. All we can do is hope for the best and prepare for the worst which is exactly what the Steelers are doing.

We’ll return this week with the Steel City Blitz Steelers Podcast and our focus will switch over to the defensive side of the ball. We are still looking for a sponsor so please consider it or if you have an idea of a Pittsburgh Area business that might be a good fit please let me know at contactscblitz@gmail.com.

Tweet of the Day… This is too damn funny.

Y’ALL PLAY TOO MUCH ??? pic.twitter.com/TmEGxkzlQI

Coming up on February 24th the NFL Scouting Combine begins in Indianapolis and will run through March 2nd. Keep in mind this will, in some part, be held during primetime for the first time ever… On February 25th, clubs can begin to designate franchise or transition tag players and must make that decision by March 10th so this is where we expect to hear a lot about Bud Dupree… The Draft will be held in Las Vegas April 23rd-25th.

Add Beasley’s name to the growing pile of free agent pass rushers for 2020. After one good season and a couple of below average ones the Atlanta Falcons announced yesterday they are parting ways with him. I’m sure his name will come up a lot should the Steelers move on from Bud Dupree.

Interesting Tidbit of the Day

So my wife is currently in Phoenix on a trip for work right now. In her hotel there is a silent auction going on and one of the items is a JuJu Smith-Schuster signed mini-helmet. Small world right?

Former Steeler Emmanuel Sanders had less than good things to say about Big Ben in a recent interview with The Athletic. I’m a Ben Roethlisberger fan and always have been but even I know he can be difficult for some and apparently Sanders is one of them. Sanders didn’t waste time a few years back when he talked about then Broncos’ QB Peyton Manning being a better leader than Ben was. That may be in fact true but the fact that Sanders is still talking about this makes me wonder more about Sanders than it does Roethlisberger. Move on man. 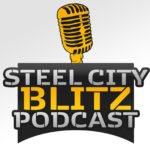