SCB Steelers’ Quick Hitters: The “Slow Down a Bit” Edition

The first set of OTAs are in the book and I have to tell you I’m already a bit irritated. I expect any number of superlatives from people on social media but when actual beat writers start making declarations about “who is going to start” and “who is going to have a hard time making the roster” I get a bit perturbed. There is no way after three days of helmets and pajamas that anyone can make such statements. So Landry Jones looked sharp… I would hope so. He’s fighting for a job but to outright say he’s the clear number two after three days is wrong. How do we know Mason Rudolph isn’t the real deal? How do we know Josh Dobbs won’t improve and put some pressure on him? That wasn’t the only thing I’ve seen though either. How about we wait until camp when these guys actually butt heads and injuries start to happen? For now, we should slow down on the predictions based on three days.

I shared my feelings on the NFL’s new National Anthem Policy yesterday. Here’s the Reader’s Digest version; it isn’t going to slow down the protests.

Tweet of the Day… The former NY Giant makes an excellent point.

It’s hard to “stick to sports” when the people in top political jobs discuss sports. That line is forever blurred. So let’s stop using that line.

Antonio Brown threw down the gauntlet of sorts to Le’Veon Bell yesterday when he said that Bell “should be here.” What we first have to understand is that EVERY player has unique contractual situations. Brown has never been under a franchise tag before while this is year two for Bell. AB has only missed one OTA before and rarely if ever takes days off. If anyone should  be able to speak to this it’s probably AB but the situations are different and if were a teammate of Bell I’d pass on answering any questions right now.

It looks as though Mychal Kendricks will sign with the New York Giants. The Steelers did in fact inquire but as of right now it doesn’t look like it’s going to happen. If they make any type of signing Lawrence Timmons probably still gets the first call.

I’m really excited to announce our partnership with Taps N’At which will hold a Grand Re-Opening on June 23rd. They are located in Derry, PA not far from the Steelers’ Training Camp in Latrobe. If you’re going to Camp, stop in for some great bar food and a brew. Jessica, the owner, is a terrific person! Say hi! 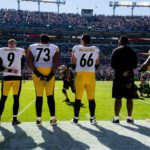 Despite New Rule, Anthem Issue is Unlikely to Go Away