These short weeks are always interesting. They put lots of pressure on the coaches to maximize a small amount of time. That means getting guys proper reps and at the same time getting them proper rest. The good news for Mike Tomlin is that having the Thursday night game at home gives him just a little more of an opportunity to get those reps and rest. Ben Roethlisberger will likely practice today after a couple of days off and that’s true of several other veterans as well. Ultimately we’ll know how well Tomlin has handled his team by late Thursday night and you can bet there will be opinions either way.

Ben and Cnic were joined by Joey Bag of Donuts last night on the Steel City Blitz Steelers Podcast 104 presented by 26shirts.com/Pittsburgh. They broke down the win over Baltimore and had plenty of fun along the way too.

I had some thoughts on just how much the Steelers’ defense has improved and how Cam Newton will either confirm that or send them back to square one.

Tweet of the Day… VWill congratulating Mike Tomlin’s son Dino on his commitment to Maryland to play football.

So Dez Bryant has signed with New Orleans and I wish I were surprised at the number of Steelers’ fans and blogs that are upset the Steelers didn’t bring him in. I mean, sure. Let’s bring in a guy with a history of being a pain in the ass and potentially merge him with another headache-in-waiting in Le’Veon Bell. Makes sense to me…

I’ve seen some discussion about James Conner being mentioned as a possible MVP candidate and I would agree that he deserves to be in that conversation. Unfortunately this is a quarterback driven league and the way that Patrick Mahomes especially has played, I don’t think he has a chance. Should he record an unusually high amount of touchdowns? That could change the script a bit.

Linebacker Bruce Irvin claims he had better offers from both New England and the Steelers but ultimately signed with his hometown Falcons. Irvin has made this claim and to this point we haven’t been able to verify it. What I can say is this; he would have been a situational pass rusher here whereas he gets more playing time in Atlanta. Seems logical to me. 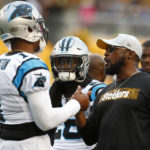 Just How Improved is the Steelers’ Defense? Cam Newton Will Provide an Answer 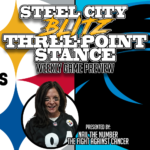 You have to love the way this team is playing. I can’t see how bringing in a Bell would help in any way but a very expensive back-up. After a very shaky start to the season. This team is really putting it together. The Panther are by no means a push over, but that’s what we did on our home field. When we stink i say something and when we roll i bark even loader. We have some tough games coming up but i think teams may be worrying about playing us at this point. GO STEELERS!!!