SCB Steelers’ Quick Hitters: The “Put Up or Shut Up” Edition

The Pittsburgh Steelers find themselves entering tonight’s game in Tampa looking up from the AFC North cellar. The good news is that Cincinnati lost falling to 2-1. The Ravens also moved to 2-1 with their home win over Denver. With two games still to come against each of those teams the Steelers can put themselves right back in the thick of things with a win tonight. Since losing to Kansas City last Sunday, we’ve heard a lot of talk from the Steelers. Now comes the time to put up or shut up. Don’t make excuses, don’t point fingers. Just get the damn job done.

Adam Schefter reported yesterday that the Steelers were in fact taking calls on Le’Veon Bell. Let me again state what has to happen here. First, a team can only sign Bell to the remainder of his tag. They may not sign him to a multi-year deal until season’s end. Bell of course has to sign the tag or else none of this matters. And also consider any team that deals for him is likely getting a one-year rental. They can in theory “promise” Bell a big, long-term deal but let’s be honest. Bell is going where he gets the most money.

In case you missed our game preview, the Three-Point Stance, here it is for your enjoyment.

Tweet of the Day… This is a good question.

Serious question: what is @ClayMatthews52 suppose to do when sacking a Qb?

Football as we know it is doomed my friends. Clay Matthews could not have hit QB Alex Smith yesterday any better or properly but he was still flagged for roughing. I understand getting the head out of tackling. I understand protecting quarterbacks. But what is happening is not good for the game. If you think anthem protests will keep people from watching, take quarterback sacks out and see what happens.

I love seeing the Patriots get beat as much as anyone and at 1-2 there’s plenty of reason to smile but the Pats have started slowly before only to get rolling and end up in the Super Bowl again. I’ll start celebrating their demise as soon as they are no longer in the playoffs.

Supposed to be very warm and humid tonight in Tampa. Look for lots of cramping.

If Artie Burns does indeed sit behind Coty Sensabaugh tonight my gut tells me Burns is getting the demotion as much for not knowing his assignment as anything physical. If Sensabaugh sees the bulk of the action tonight don’t be surprised if you see a lot of zone coverage. 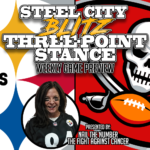 SCB Steelers’ Quick Hitters: The “One in the Win Column” Edition

This is what i saw watching from the stands. Much like last year Ben is off with his deep ball. He needs to get it together i’m going to be honest. We have a great trio of receivers James Washington runs great routes for a rookie. James Connor looks good he wore the defense down but he did miss some holes. I think everyone has a bad game [Mike Hilton]. This protecting the QB thing has got to go, it’s laughable. And what’s ailing Boswell and who punts low and short right at D. Jackson we got a huge break there. I’m glad we won but this team has some work to do.

I messed up on the bad game part, Safeties Sean Davis and Matt Berhe would be the guilty parties