The very last thing I’m going to claim to be is a financial expert when it comes to the National Football League. That said, I do have a basic understanding of how the Pittsburgh Steelers do their fiscal business year in and year out. They are strong believers in drafting and growing their own players. Free agency to them is not a lifeline that requires going after the top available free agents. But rather, it’s used to fill depth and an occasional starting position. Because the Steelers prefer to pay their homegrown players like Ben Roethlisberger, Antonio Brown and Cam Heyward rather than sign big name free agents, this doesn’t always allow for a lot of room for these free agents. Consider too that Roethlisberger isn’t a quarterback on his rookie contract either which is important because QBs take up so much cap space. But what many fans don’t recognize too is that when a guy like Tyrann Mathieu becomes available, money just doesn’t appear out of thin air. This is why there is a salary cap. Teams only have so much to spend and in order to keep your own talent you have to spend significant money. This leaves little room for spending outside of that. The alternative is that you can be a team like Washington or Cleveland or Buffalo and spend free agent money like it’s from a monopoly game. What kind of success have those teams had? I don’t like everything the Steelers do but I understand the process.

Speaking of Mathieu, it’s been reported he will want more than $8-9 million per season. In other words, he isn’t coming to Pittsburgh.

Tweet of the Day… Mike Hilton and Jesse James were two guys who received such checks.

To All NFL Players,
Remember:the Player Performance checks you receive comes from money taken out of the cap to benefit the guys making the least to greatest.That’s $5.9m/ team this coming year that could be in the cap but instead the bulk is paid to the guys with lower salaries

While William Gay and Mike Mitchell were expected to get their releases yesterday one surprise was the release of Rob Golden. While Golden would not be on many teams as a safety, he has been a special teams’ wiz for the Steelers. His release tells me the team is headed in a different direction in the secondary and it’s more than just new Defensive Backs’ Coach Tom Bradley.

The free agent market for free safety players was small and the inside linebacker market has pretty much been erased with most of the top players having already signed. This is definitely where I understand the frustration Steelers’ fans have. Pittsburgh has Vince Williams and no one else of starting quality at ILB.

The Arizona Cardinals are giving Sam Bradford $20 million for one season with $13 million guaranteed. I wouldn’t touch him with a ten-foot pole. Has he ever made it through a full season without an injury?

This is my latest Draft Profile on Penn State TE Mike Gesicki. 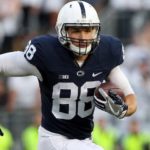