The Steelers returned to practice yesterday following two days off to cope with the sudden passing of Wide Receivers Coach Darryl Drake. It was clear from the beginning that this was going to be a tough day. Mike Tomlin spoke first and clearly was still trying to make sense of Drake’s passing. While he had only been here for a season plus Tomlin knew Coach Drake for many, many years. He was not the only one struggling as several photos made their way around social media. Ryan Switzer was clearly still hurting as was JuJu Smith-Schuster who was comforted by Ben Roethlisberger. As fans, we expect our team to get “back to business” and to “move on.” This is yet another example of the fact that these guys are as human as you or I despite their athletic gifts.

Expectations for the Chiefs

The Steelers host the Kansas City Chiefs this weekend and I’m grateful it’s the preseason. I expect the Steelers to play with passion but I also expect there to be mistakes. Missing two practices and part of a third (yesterday was called early due to weather) can only mean the expectations should be lowered slightly. I doubt Coach Tomlin will say that, but we have to be realistic here don’t we?

Tweet of the Day… This really is getting to a point where I wonder if Luck will ever be 100% again. I always want the good players to be able to play around the league but I really have my doubts with him.

This is only getting worsehttps://t.co/fA7h3H2uw0

A Good Nugget From Kaboly

The Athletic’s Mark Kaboly mentioned yesterday that Ray Sherman, long-time NFL Coach, has been working with the Steelers throughout Camp. Notably, with the wide receivers. I don’t want to speak for Mark but I think what he’s getting at is that this seems like a perfect transition to replace Coach Drake. Sherman obviously has to be willing to take that on of course.

It has been made known that the Houston Texans are shopping Jadeveon Clowney. No. No. No. The Steelers are not reading for him so get that out of your head right now. He’s in a very similar situation that Le’Veon Bell was this time last year so you’d essentially be renting a player kind of like they do in baseball. It ain’t happening people.

Boy, Ben Roethlisberger sure looked like a poor leader yesterday comforting JuJu didn’t he? I’m so sick of that narrative… Don’t get too bent out of shape if Mason Rudolph doesn’t start over Josh Dobbs this weekend… The Cowboys have offers out to Ezekiel Elliott, Dak Prescott and Amari Cooper. Talk about make or break for the future… I have to believe that along with Joe Haden, the Steelers have to be talking to Javon Hargrave too. No way you want him getting to free agency. 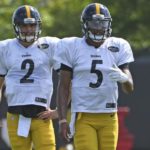 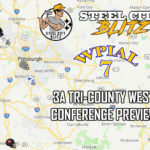