I’m a big fan of perspective. Getting different views of things we all see is important in a number of ways. Several years ago the Pittsburgh Steelers had an outside linebacker named Jason Worilds. He was often a lightning rod for discussion throughout the Steeler Nation because many felt he should have been better while others thought he was overpaid and on and on and on. Now, several seasons later, we have the Bud Dupree situation. Many remain unimpressed with the former first round draft pick while some continue to beat the drum for him. In our daily discussions at SCB, Chris posted some interesting facts comparing Worilds and Dupree after their first four years in the NFL. A couple of numbers that jumped out at me were… Sacks: Worilds 25.5 Dupree 20… QB Hits: Worilds 67 Dupree 33… Total Tackles: Worilds 190 Dupree 132.  Those stats don’t necessarily tell the entire story but when you consider how many of us thought that Worilds was an underachiever and then we look at Dupree? Let’s just say that Bud needs a huge season to quiet his critics.

Speaking of Dupree, Chris had quite a suggestion last night on the podcast (see below)… Can you imagine if T.J. Watt is lined up opposite Ola Odeniyi and not Bud Dupree when the season begins? Don’t rule it out just yet.

One of the items we discussed last night on the SCB Steelers Podcast presented by 26shirts.com/Pittsburgh was the two-way play of rookie Sutton Smith. The Steelers have worked him a great deal at a FB/H-Back position as well as at linebacker. You’ll hear me say this during the show but don’t be surprised if you see him utilized on special teams as well.

Tweet of the Day… Interesting point here by Ross. What’s the delay???

Browns were announced as the Hard Knocks team on May 17th last year.

Would love to be privy to the conversations/negotiations behind the scenes right now as they try to pick a team for this year. pic.twitter.com/OIec38jHya

OK. Part of the reason I used that tweet is that Caddyshack is my all-time favorite movie. Guilty as charged.

The Steelers now have all of their draft picks signed as third rounder Justin Layne is officially under contract. The best we can gather is this came down to contract language. Draft pick salaries are slotted so money isn’t typically a big issue. Ben noted on the podcast there are other third rounders on other teams not signed either.

Former Raven Defensive Lineman Haloti Ngata said this week that breaking Ben Roethlisberger’s nose was one of the great plays of his career. I did not see the interview or read the context of it to know if he was saying this tongue-in-cheek or is he was serious. If he was in fact serious then my respect for him takes a hit. That’s not the type of thing you celebrate doing rivalry or not. 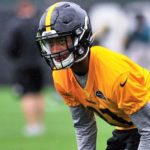 Justin Layne is Everything You Want in a Cornerback