I do not understand why people are in such a hurry to find out numbers of rookie players. I recognize that many want to know because they plan to order a Devin Bush jersey or a Diontae Johnson jersey (more on this below) but fans need to understand that many times rookies will change their numbers prior to the regular season. This comes typically after veteran players have been cut or traded. Hines Ward switched and so to did JuJu Smith-Schuster. I get the excitement – I really do – but be patient Steeler fans. Trust me you’ll thank me. There’s nothing worse than getting a jersey that no longer matters.

Speaking of this, my standard rule when it comes to buying jerseys is simple. Never buy a jersey of a guy still on his rookie contract. Le’Veon Bell anyone? Artie Burns anyone? Now I’ll admit there are some exceptions. Cam Heyward and T.J. Watt are probably the best ones in recent years. Jerseys are expensive so be smart about who you you buy. The last thing you want is to be the guy burning yours on Twitter.

Tweet of the Day… Cam Heyward is clearly disappointed he didn’t spot the Starbucks cup left on the table in last night’s “Game of Thrones” Episode.

Can someone explain to me why Joe Theismann thinks he has the right to tell Dwayne Haskins if he can wear ‘number 7’ or not? Perhaps the Redskins do things differently but most teams decided the fate of numbers. While the Steelers have only retired Joe Greene’s 75 and Ernie Stautner’s 70, many numbers are never given out and that’s at the direction of the Steelers’ equipment folks. Should the Steelers want to give out Terry Bradshaw’s 12 or Jack Lambert’s 58, they can and will. Personally I think Theismann sounds like a bitter old guy but perhaps that’s how his former team operates.

What a sight it was to see Ryan Shazier dancing with his new bride this past weekend. This is a man who not that long ago could not walk let alone dance. Not sure what else needs to be said here. Truly remarkable.

Lots of discussion about whether the Steelers drafted Diontae Johnson too high last week and here’s what I’m thinking… If there is any area I am NOT going to question the Pittsburgh Steelers on it’s drafting wide receivers. The record speaks for itself and they already went on record as saying they had a first round grade on him. I’m not saying another word until I see him on the field. 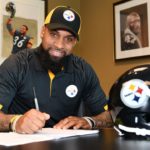 Should Free Agents Be Hesitant to Sign With Pittsburgh?