Good Monday to you Steelers Fans.

I honestly don’t know what to compare mock drafting to. If I actually told you how much time I put into my first mock draft you would seriously question my sanity. You’d also realize that I have a fairly boring life too. But I do take them seriously because I don’t want to look like an idiot. The last thing I want is to have a guy mocked to the Steelers, let’s say in round two, when he is more likely to be drafted in round six or seven. I also make sure that anyone I mock fits the Steelers as well. It doesn’t make sense to draft a center who isn’t mobile if the team is moving to a zone blocking system. So yes, these mock drafts are not everything they are cracked up to be but there’s an audience for them and that’s why I do them.

As for MY Mock Draft

Here is the link to my Steelers Mock version 1.0. Understand that I do these from the vantage point of what I think the Steelers will do. What I would do is something far different and is exactly the reason why I’m not an NFL GM.

Tweet of the Day… James Conner leaving a lot for us to consider.

A lot of you don’t know who Irv Cross was and that’s OK. You’d have to be old like me. While Cross was a two-time Pro Bowl cornerback, his influence for me was as a member of CBS’ NFL Today pregame show in the 1970’s. His voice was immediately recognizable and his presence was the surest sign that there were big games in the NFL that day.

There’s an old saying that professional athletes in any sport always dream of being professional athletes in a different sport. What we are seeing now with Deshaun Watson and Russell Wilson, who are football players, reminds me a lot of what we see in the NBA. Players in that league now have all the power on who they play with and where they will play. There’s no question that what Watson and Wilson are doing is similar. While most people look at Watson and say, “he has no leverage,” I see it as just the opposite. If I’m the Texans’ GM, why do I want a guy who doesn’t want to be here? Why not do my job, trade him and get a king’s ransom to REBUILD MY TEAM? I don’t like the direction this is going in but it is what it is. We’ve reached that point now. To let Watson just sit out is dumb. Trade him and rebuild your team. 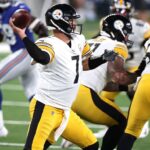 SCB Steelers Quick Hitters: The “Watt Did We Tell You?” Edition