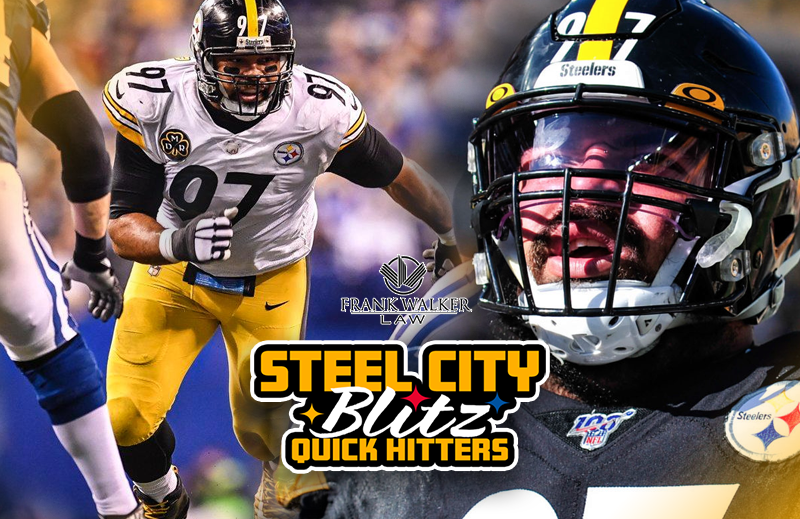 Diontae Johnson showed up to OTAs yesterday which immediately brought out one big question. “What will fans complain about now?” As you know, Johnson is entering the final years of his rookie contract. The Steelers have only given second contracts to two receivers, Hines Ward and Antonio Brown so Johnson is trying hard to join the list. He has the numbers for sure, but has the recent explosion in wide receiver deals put him almost out of range for the Steelers? When the 2021 season ended, the general consensus was that Johnson would probably be looking at a deal worth $15 million per year. Many people, including myself to be honest, balked at that number. But then the Jaguars awarded Christian Kirk with a ridiculous contract that will average $18 million per season. His numbers are very similar to those of DJ, so Johnson is well within his rights to demand something similar. The Steelers now have two rookie receivers in George Pickens and Calvin Austin III who will be under contract for a bit. Chase Claypool has to have a major leap forward in production for him to get even a consideration for a new deal so that leaves Johnson in a pretty decent position to get a new deal. My guess is he’ll demand $20 million but the Steelers won’t go there. Omar Khan must also factor in the Minkah Fitzpatrick situation. He has to be a priority over anyone else so Johnson will have to be patient.

Tweet of the Day… The Right choice by EA Sports.

The legendary John Madden returns to the cover #Madden23 pic.twitter.com/unfWPYV6KD

If you take players and the media at their word, then Linebackers Coach/Defensive Assistant Brian Flores is the second coming of (insert legendary defensive coach). The players are raving about him and then the media carries this into their stories. There’s no question that Brian Flores can coach. You don’t accomplish the things he has with Bill Belichick if you can’t. Referred to as a “bulldog” by Terrell Edmunds, Flores gets after from the first whistle to the last. I think we all knew this was a great “get” for Mike Tomlin but how well it pays off is yet to be determined.

I don’t think there is any doubt to the fact that Cam Heyward is taking seriously his role as a captain and a leader. He knows that Father Time is unbeaten and he’s going to do everything in his power to get himself a shot at a Super Bowl. I also believe he’s putting himself in a great position for his post-football career too. He spent a lot of time this offseason doing radio shows and some TV appearances as well and he came off quite good.

Kenny Pickett was the 20th overall selection in the NFL Draft. He’s currently the third string QB for the Steelers. Such is life when you’re a rookie. Pickett is taking things in stride and understands that no one is going to give him anything. Proving on and off the field every day is a huge step forward in the process. If Pickett is handling things this well than so too shall the rest of us. Let things play out people!

SCB Steelers Quick Hitters: The “There Will Be Change” Edition