SCB Steelers’ Quick Hitters: The “Is Today the Day” Edition

A terrific Tuesday to all of you in the Steeler Nation!

As I laid out yesterday, today is 60 days since Martavis Bryant applied for reinstatement with the NFL. It’s my sincere hope that by the time you read this he will already have been given his wish. Unfortunately Roger Goodell doesn’t always do things according to schedule so we and Bryant may be waiting awhile.

Projecting the Draft is somewhat like trying to nail Jell-O to the wall. Every time you think you finally have it goes to pieces again. The more I look at how this draft could go the more I’m convinced of things going one of two ways. It’s either going to be a cornerback or an EDGE  rusher. Really going out on a limb right? The way I see it, the Steelers aren’t going to reach for an EDGE rusher if their top targets aren’t there. That would likely mean there’s been a run on them which could mean some good cornerbacks are available at 30. If Bryant is NOT back by the draft then wide receiver is back on the table too.

I think the Steelers are blowing the usual amount of smoke and it will continue. They want teams to think they are looking at QBs only to make their pick at 30 more enticing. Blowing smoke is a big part of the process.

Tweet of the Day… Amen to this Mike Logan!

Back pain is the worst!!!

I honestly do not know how I’d react if I were a Raiders’ fan. Knowing my team is leaving in two years would make me seriously question my loyalty to the team. Making it worse is the fact that the Raiders are a pretty good team right now too.

I will be very surprised if the Steelers move up in this draft. The cost is too much for their blood in my opinion. Moving down? It’s an option although moving into the second round means you lose that fifth-year option for all guys drafted in the first. Either way, Kevin Colbert has moved up twice in the first and has moved down once. So there’s precedent for both.

Please continue to check out the Draft Journals as we profile guys the Steelers may have interest in.

The SCB Podcast sponsored by BodyTech Gym will be on Wednesday night this week and we will talk exclusively the draft. Our topic this week will be EDGE rushers and cornerbacks. 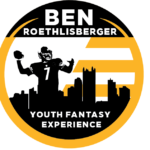