When it comes to discussions about who is and who isn’t a Hall of Fame player, we as a football loving society have lowered our expectations. We have also failed to realize that the game evolves and when it does, player statistics will evolve as well. What is the criteria for a Hall of Fame-caliber? That’s debatable, as is the entire question of who is deserving and who isn’t. When New England Patriots’ WR Julian Edelman announced his retirement yesterday the HoF issue immediately reared its’ ugly head, yet there was no need for it. The tweet below is from one of the most respected names in football stats and information and it leaves no doubt as to where I’m going with this conversation.

but compare his career to Hines Ward, who can't make the final ballot in HOF voting the last 5 years

Hines Ward will always be one of my favorite Steelers but I even question whether or not he’s deserving to be in the Hall of Fame. Look at his numbers compared to Edelman’s. Why is this even a discussion? I’ll tell you why for a couple of reasons. First, everything is a debate these days. Secondly, we are enamored with championships and third we are also enticed by loyalties and fandom. If we can’t separate ourselves from these things and be willing to have honest, analytical discussions then we might as well just sit at the end of the bar and have these debates. Julian Edelman was a terrific, hard-nosed player any team would relish having. He is not anywhere close to being a Hall of Fame player. If he is, then this might as well be named the “Hall of Pretty Good.”

Keep in mind that I’m a Najee Harris fan but RB in the 1st round is very much a short term investment.

Harris will be 28.5 when he’s due to begin his 2nd NFL contract.

I mentioned yesterday that both of these young men, starting today in Columbus, will get a second Pro Day opportunity. The difference here between this one and the first is that NFL scouts and coaches will dictate what they want to see. There won’t be the ‘scripted’ stuff we see in most Pro Days. I credit both of these guys for doing this. One could argue they have more to lose than to gain with each expected to go in the top 10, but there’s also the possibility that scouts see something positive they may have missed the first time around.

Free agent running back James Conner was in Arizona yesterday visiting the Cardinals. I’m curious to see what he ultimately signs for but I think it was pretty clear the Steelers weren’t bringing him back regardless. Conner’s ability to produce has never been the question. His ability to stay healthy and on the field is. I wish him well should he end up there or anywhere else in the league with the exception of course of division rivals.

UPDATE: Conner has reportedly signed a one-year deal with the Cardinals per several sources.

One source revealed to us that Alejandro Villanueva has an offer from the Steelers to return but he’s been told he’ll be competing for his job. Sentiment we are told is that Big Al may be testing the waters before making a decision. To me, this is a clear indication they are going with Chuks Okorafor at left tackle yet have some concerns. This could also impact their draft plans. I continue to think that unless one of those top two or three tackles drop, they won’t be taking one early. 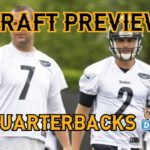