There was a lot of news yesterday about Steelers’ defensive tackle Javon Hargrave who is entering the final year of his rookie deal. Rumblings suggest that the Steelers may not look to extend him prior to the beginning of the season. I immediately shared my thoughts on this yesterday… I am of the opinion that letting him get to free agency is a mistake. I realize the team is already in deep to both Cam Heyward and Stephon Tuitt but I really like Hargrave’s value and his production. If ‘Grave Digger’ hits the open market he’s as good as gone and that’s a shame. Right now the Steelers are trying to extend Joe Haden and I totally get that. Ultimately, I think they’ll regret the huge deal they gave Tuitt when that money could have gone to Hargrave.

The Steelers’ View of Hargrave

My understanding is that the Steelers see Hargrave as a guy who has benefited from consistent double-teams faced by Heyward and Tuitt leaving him to dominate a single man across from him. When he’s doubled they do not view him as stout as he needs to be. There is some truth to this but I’m not sure how you replace Hargrave’s production with a rookie or mid-level free agent that the team is sure to look for when he’s gone.

Tweet of the Day… I agree with this take from a fellow Dad.

Okay, somebody in Pittsburgh better get started sculpting a Rocky Bleier statue.

As the Cut-Down Approaches…

At 4pm Eastern on August 31st, all NFL teams will need to have their rosters cut down to 53 players and have their practice squads set as well. Right now the Steelers could probably get themselves down to 65 with relative ease but there are definitely questions that remain. Is the tight end situation set? Vance McDonald is set in concrete. Xavier Grimble is hanging on to the second spot primarily because there is no one to challenge him. Kevin Rader has been decent as a blocker and Zach Gentry has been OK. While I’m set to see the Steelers go with this group, I also believe if the waiver wire around the league breaks right, they could find a vet tight end. Then there’s the safety spot. Has Kam Kelly done enough to be Sean Davis‘ backup? If not, is a veteran who gets cut loose an option? And lastly, what on Earth do you do with all those linebackers? Someone isn’t making the roster that probably deserves to… There are still a lot of things to happen so buckle up!

Before there was Rocky Balboa and Dwayne “The Rock” Johnson there was Rocky Bleier. If you didn’t see the ESPN documentary last night about his return to Vietnam for the first time since he left as a wounded solider then do yourselves a favor and see it! Bleier has always been a special player and person to me because my father served two tours of duty in Vietnam. My Dad was killed in a car accident at the age of 57 and I’ve always wondered if he would have gone back there. To see The Rock go back to the very spot he was wounded had a lot of emotion for him and rightfully so. It was emotional for me as well. 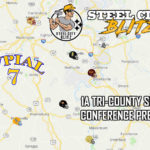 My honest take on Hargrave is that he would be far more effective at the D-Tackle position. While he’s more than suitable to play the nose i think he has the potential to be a top tier Tackle. And i’m pretty sure there’s a team or two that feels the same way. I’m sure this has crossed his mind as well and it’s going to be hard to keep him around.