Happy Hump Day Steelers’ Fans! Get over that sucker and it’s all down hill. Until next week of course…

When this site started six years ago, the goal was to be real and to be honest. That meant giving opinions that weren’t always popular and being brutally honest about our Steelers and the NFL. For all of the hatred and anger I’ve written towards NFL Commissioner Roger Goodell, today I have to give him credit. He did what I did not think he would do… He reinstated Martavis Bryant yesterday PRIOR to the NFL Draft which begins tomorrow night. I do not and I stress, I DO NOT, believe this impacts the Steelers’ plans. I still see a wide receiver coming off the board to them in the first four rounds simply because they should not trust Bryant to stay the course any further than they could throw him. Yes, I/We all want and wish the best for Bryant but he has much to prove. Either way, thank you Commissioner for not being a jerk this time.

Make sure you catch the Steel City Blitz Podcast presented by 26shirts.com/Pittsburgh tonight at 10pm ET. We will discuss Bryant and make our final declarations for the draft.

In case you were wondering, the Steelers’ front offices were not on fire yesterday but there was a ton of smoke pouring from the facility. Many different outlets reported that the Steelers will strongly consider Notre Dame QB DeShone Kizer with their 30th pick. The only way this makes sense is if Ben Roethlisberger has told the team this is his final year. Otherwise, it’s a horrible pick. They are so close to another Super Bowl right now that drafting a guy who will never play in 2017 is asinine.

Tweet of the Day… Very cool from Big Ben.

I caught the final 20 minutes of ESPN’s Mock Draft last night. Each of the team reporters (Jeremy Fowler for the Steelers) made the selections. He chose Western Michigan wide receiver Corey Davis. What was interesting in this mock and I stress the word “mock,” was that more QBs and pass rushers were off the board than I expected. The one guy that was still available and went right after Davis was Kansas State Edge rusher Jordan Willis. He’s a relentless pass rusher who our very own Cnic has mocked to us in the first round.

I like a lot of the things that Mitch Trubisky offers as a potential starting quarterback but I tend to agree with NFL Network analyst Mike Mayock. 13 games is a very small number of starts with which to judge his long-term potential. Speaking of, there’s a rumor that the Browns will find a way to trade up and take Trubisky at number two. That would cost a significant ransom. 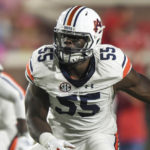