The National Football League ran a ‘mock virtual draft last yesterday and it didn’t take long for there to be issues. Glitches were reported within the very first selection by the Bengals. Of course that in and of itself speaks volumes but I digress. There were reports of slow speeds, constant interruptions and even general managers and coaches complaining that their home bandwidth wasn’t enough to properly communicate. While I appreciate the NFL moving forward with its Draft in a responsible and safe manner given the circumstances, if this thing has problems throughout it could end up being a massive joke. Let’s hope the proper steps are taken to make sure the Draft goes off without a glitch.

We will be recording our Defensive Draft Preview tonight. Last week we covered the offensive prospects for the Draft. It should be posted late tonight. The Steel City Blitz Steelers Podcast is presented by DEK Roofing, Inc.

Tweet of the Day… Good to see other Dads have similar problems in today’s world.

I was on the phone with a head coach talking about the mock draft today and he was losing his mind because his Internet went down…apparently his young children were all on their iPads using up the band width. “ everybody get off the Internet”-in loud dad voice.
I hung up.

The Mike and Kevin Show

Yesterday Steelers’ Head Coach Mike Tomlin and General Manager Kevin Colbert held a ‘Zoom’ conference with local media. A pre-draft presser like this is very common yet the video conferencing is a bit unique. What I would take from their thoughts are these… They love how deep the Draft is with wide receivers… they will address the offensive line… and if I were a betting man I would wager that they’ll take a running back. Keep in mind that these pre-Draft get-togethers really don’t amount to anything more than guesswork and talking points we all kind of create ourselves. The last thing Tomlin and Colbert want to do is reveal their actual thinking.

The SCB Top 50 Draft Board

Our crew here at SCB contributed a ton of insight, research and information and Ian put it all together… This is our Top 50 Draft Board. This is easily the most intense and informational piece done here at SCB all year so please take a moment to swing by and tell us what you think! 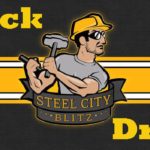