Antonio Brown’s self-preservation tour came to the air waves of Pittsburgh yesterday. Brown joined Colin Dunlap on 93.7 The Fan and issued many apologies but also resumed his dislike of JuJu Smith-Schuster, Hines Ward and others. Like many of you I cheered for Antonio Brown. I bought my son an ‘AB’ jersey and had many fantasy football and Sports Illustrated magazine covers of him plastered in my ‘Fortress of Steelertude.’ All of those things are gone. Also gone is my patience and tolerance for him any longer. This is not CTE and this is not “outside influences” like Chad Johnson or Terrell Owens making him behave the way he has. This is 100% him. He is a ‘me first’ person and he always was. Winning was never the most important thing for him and you believe that to be false you’d be wrong. He was always happy to speak to the media following games where he had big numbers win or lose, but try to get some quotes when he isn’t the star of the game? Forget it. This is a guy who never grew up. Because of his talent, he was enabled all throughout his playing career and it started before he ever got to Central Michigan University. He said as many of the right things as he could yesterday – praising the Steelers, Mr. Rooney, Kevin Colbert, and the like – but this was about him trying to resurrect his career. Did Brown think these people would just forgive and forget? Whether Ben Roethlisberger ever plays another down at quarterback do you honestly think he wants Brown back? And Brown’s jealousy of JuJu is as immature and childish a thing I’ve seen from a 31-year old man. I do not know what the future holds for Brown but I know it’s not with the Steelers. What Brown has finally realized is that all of the bridges he’s burned are not being rebuilt. Or maybe he hasn’t realized that at all since he keeps trying to say “I’m sorry” with his fingers crossed behind his back.

We absolutely love what we do here at SCB and we do it for free. Unlike some other Steelers’ sites we don’t do pop-ups or other annoying things in an effort to make money. We rely instead on sponsors to help us pay our site fees, podcast fees etc. We are looking for businesses to sponsor our podcast, our NFL Draft coverage and our WPIAL High School Football Coverage. Please hit me up at contactscblitz@gmail.com if you are interested.

Tweet of the Day… I sure hope Mark Madden didn’t have a heart attack when seeing this.

The latest proposal as part of the negotiations between the NFL Players’ Association and League Owners is have a 17-game schedule. There are some groups inside the NFLPA that are willing to accept it if it comes with concessions like an extra bye week, increased roster sizes and of course increased compensation. The issue within the NFLPA is that there are those who are vehemently opposed to this. I think we can all agree the preseason is much too long and a shortening of that would be appreciated. I wouldn’t even mind an extra bye week within the current 16-game schedule but what I absolutely DO NOT WANT TO SEE is more playoff teams. What separates the NFL from basketball and hockey is that half the league doesn’t make the postseason and that’s good. Teams that win their division or finish well enough within the conference deserve the postseason not teams at 8-8 or worse. 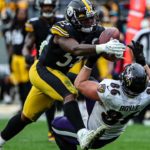