Allow me to add this disclaimer before I being… I hope that I am wrong. There, that’s out of the way.

I’ve been trying to let you all know since the end of the season that the likelihood of JuJu Smith-Schuster being a Pittsburgh Steeler in 2021 is so slim that it’s almost non-existent. There is a chance that with a new TV agreement that the salary cap could go from the floor of $175 million to perhaps as much as $185 million. Most believe it’s going to come in around $180-182 however. That amount is still not enough to consider keeping JuJu in town. Remember that the Steelers still have to get some 17 or 18 other guys taken care of as well and we already know that some of those decisions aren’t going to be easy either. For all of his social media stuff that often divides Steelers Nation, the guy is a damn good player and he will be missed because between the pandemic and the Steelers kicking the can down the road on so many contracts it just isn’t going to happen.  One such person who is “struggling” with this is our friend Sam…

Our look into who believe are strong Steelers’ possibilities for this year’s NFL Draft has begun. You can find profiles for Running Backs Najee Harris of Alabama, Michael Carter of North Carolina, Chuba Hubbard of Oklahoma State and Quarterback Kyle Trask of Florida in our Prospect Profiles section.

I really am disappointed that the Combine as we know it won’t be available this year. I understand why but it’s still quite a bummer. While watching the guys perform is a highlight I also liked hearing about their lives as well. Where are they from? How did they do in school? Were they consistently good performers? Did they show up in big moments or did they disappear? What is their injury history?… You get the picture. There’s so much more that teams have to consider with these players than just size and reps on a bench press. I like that side of it too.

Tonight on the Steel City Blitz Steelers Podcast presented by DEK Roofing we’ll start digging into the salary cap issues the Steelers are facing. As part of that we’ll discuss the players with one year left on their respective deals and what could be done with them. Plus, you’ll love the story about an email I received from a Ravens’ fan. 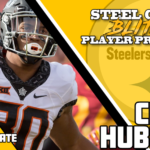