I know this sounds like hyperbole but I swear it isn’t. Today is often as anticipated as Christmas or even a birthday for we Steelers’ fans. Why? Because for some, it means they can reach for the calendar and block out those dates where our beloved Black and Gold will be playing. For others, it means finding that one game every year for the pilgrimage to the Steel City to see the guys in action IN PERSON! I took a stab at guessing the Steelers’ 2021 NFL schedule last night so by this evening I’ll know just how far off I was.  Reportedly, the NFL will release the entirety of the Week One schedule this morning and then the rest later in the day. While I didn’t choose the Browns as our week one opponent I’m fully expecting it to be honest. And no sooner did I type that than I have just seen that the Steelers will open on the road AGAIN this time in Buffalo for a 1pm ET kickoff.

The Cleveland Browns will return to the spot where their season ended last year as they play the Chiefs in KC in a late afternoon kickoff… The Baltimore Ravens will open the season in Las Vegas in the only Monday Night Match-up this year. Normally there have been doubleheaders but not anymore… The Cincinnati Bengals are the only team in the AFC North to open at home as they will entertain the Minnesota Vikings.

The defending champion Buccaneers will host Dallas to open the season on the traditional Thursday Night game… The Packers and all of their current drama will open in New Orleans. This could be a matchup of Jameis Winston vs Jordan Love… The NFL wasted no time in revenge games by having Sam Darnold face his old team in week one… Miami gets to go to New England in good weather week one avoiding that late season snow game.

I am really excited that DC4L Custom Tees is now working on some hats for us. I got a preview of them this morning and I’m very excited about them. Style that fit everyone with a brand new font style for the site. Hopefully I’ll have these available this week.

Something to Keep an Eye On

While it’s pretty obvious that Najee Harris will be the starting running back, I don’t see (at this time) a clear favorite for the number two job. Will returning to a more familiar offense make Anthony McFarland, Jr that guy? Will Benny Snell emerge or remain in short yardage spots? Do you recall that the Steelers signed Kalen Ballege? What could he possibly bring to the team? Does Jaylen Samuels even remain on the roster by the time we get to September? I think this battle is going to be really intriguing. 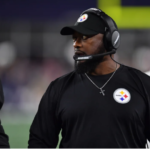