Earlier this morning ESPN’s Adam Schefter tweeted that the Hall of Fame Game on August 6th between the Steelers and Cowboys has been cancelled. The two teams are scheduled to play again in 2021 as of right now. The Enshrinement ceremony which was scheduled or August 8th has been postponed. These two events are more than a month away yet but I fear these are harbingers of things to come. For some time now I have tried to see the forest through the trees regarding the pandemic and football returning. I am hopeful there will be “some” form of a season but I honestly don’t see a full season happening right now. It pains me to say it… At the very least fans aren’t going to be in the seats I can tell ya that much. “Cancellations” is a word we better get used to hearing.

We recorded episode 177 of the Steel City Blitz Steelers Podcast presented by DEK Roofing Inc last night. We discussed the shuffle along the offensive line, Tyson Alualu “starting” at nose plus thoughts on Big Ben’s admissions. We had some pretty good laughs too! Check it out!

Tweet of the Day… I don’t know if he’ll win the battle for right tackle but this young man is a winner in my book period.

Just donated $185 (925 more meals!!) to @PghFoodBank! Seriously you guys are THE BEST! Thank you for these @BookCameo requests. We’re in this together.

I Knew It Was Coming

Just in case you weren’t sure, I absolutely LOATHE the type of advertising I see in professional soccer, NASCAR, etc. I understand why they do it but I hate it and I’ve always said I will never buy a Steelers jersey that has advertising on it. The NBA has already sold out with each team having a sponsor logo on the upper left of their jerseys. This morning profootballtalk.com announced teams would be using the lower portions of their stadiums to advertise. Roughly, the first 6-8 rows have been vacated by fans in order to keep them from getting too close to players. So what the hell? Let’s slap some ads on there! Again, I get it but I don’t like it because I know where it ultimately leads. 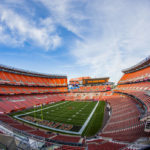