I cannot recall this much activity prior to the beginning of free agency in the National Football League. The Cleveland Browns made four different deals over the span of two days. This easily made them the busiest team in the league. Don’t think that the Steelers will be completely silent here though. It’s expected that Mike Mitchell will be released prior to the start of free agency on Wednesday, March 14th. It is very possible that veterans like William Gay and Coty Sensabaugh could be cut loose too.

As for the usual question I get this time of year… “Will the Steelers FINALLY spend some money in free agency?” Yes, they’ll spend money but no, it won’t be on big name free agents. I don’t see a ‘James Farrior’ or ‘Jeff Hartings’ coming in this year’s free agent moves but the Steelers do have needs. They’ll look to add depth at both inside linebacker and free safety.

In case you missed his excellent coverage, Ian’s bracketology was again on par with “the experts” Jerry Palm and Joe Lunardi. He had 66 of 68 teams correct, 41 seeded correctly and 63 seeded within 1 seed line. He finished dead-even with both experts and actually had more correct seeds than did Palm.

Tweet of the Day… One of these people has a Super Bowl ring.

Out supporting a great cause tonight at The @7BOOMERESIASON Foundation Dinner. Always nice bumping into @CollinsworthPFF! pic.twitter.com/UJZF5HqJwn

There’s no way I would have paid Richard Sherman that kind of money if I’m the Niners. Achilles’ injuries are among the most difficult to return from and even when players do, they rarely return to their top form. Granted, the money is heavily incentive-laden but still…

The biggest mystery about the Steelers in this coming Draft is what will they do if the top inside linebackers are off the board. Do they go with a safety? What about a cornerback? This, to me, is the most intriguing part of the Steelers’ draft as I type on March 12th.

Surprised things have been quiet between Le’Veon Bell and the Steelers? Don’t be. The two sides are at a stalemate and probably will be thru Training Camp.

One last thought on free agency… Many seem to think that Steelers’ Salary Cap Wizard Omar Khan will work his magic so the team can afford any player. That’s wishful thinking. While Khan is one of the best at what he does, he cannot magically make money appear where there isn’t room for it. This isn’t Madden ’18 people. 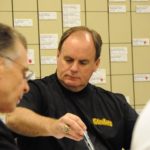